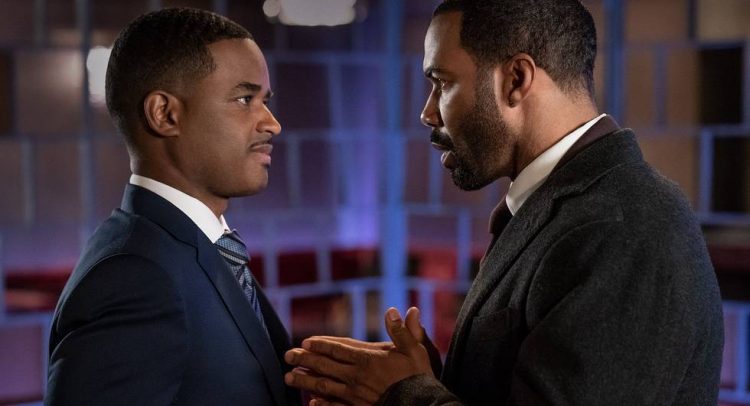 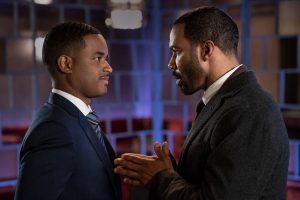 The lies are starting to catch up with everyone who’s been telling them, and things are slowly unraveling for everyone involved. This is especially true for Tariq (Michael Rainey, Jr.) who’s been telling both his parents that he was no where around when his sister Raina (Donshea Hopkins) was murdered.

A surprise visit to the St. Patrick’s home from a detective who’s asking follow up questions on Tariq’s whereabouts the night of the murder are setting off red flags for Tasha (Naturi Naughton). She knows he’s not being honest but, then again, she hasn’t been completely honest with him about anything pertaining to their family business as drug dealers.

Their dishonesty with one another finally comes to an end during their trip to Choate. In the car they have an open, heart to heart conversation where Tasha tells him how rough it was growing up in Queens for she and Ghost (Omari Hardwick). Selling drugs was their only way out of the hood to provide a better life for their family.

She tells him that she and Ghost kept that part of their lives away from him and his sisters to protect them. Since she’s willing to open up to him, he finally opens up to her and tells her the truth. In a tearful confession, Tariq admits to being there when Ray Ray shot Raina.

He may have finally spoken the truth about the details from that night but that doesn’t stop the continuous damage control that needs to be done on his behalf. Angela Valdes (Lela Loren) seems to be doing her best in handling that. Especially when it comes to Internal Affairs officer Blanca Rodriguez (Monique Gabriella Curnen).

Rodriquez is getting way too close to figuring out there’s a connection between Valdes, Tariq, Ray Ray’s murder and Raina’s. She’s poking around asking way too many questions and finds that Valdes’ name keeps popping up in all of those answers. The pressure is on Valdes and she has to act fast. She issues a warrant to have Rodriquez’s investigation shut down. After all, she is calling the shots over at the AUSA’s office now, so she can do that!

Valdes and her AUSA cohorts are busy in other areas too. They finally put the pieces of the puzzle together to see the big picture and at the center of it all is not the Jiminez “brothers” but the Jiminez siblings – Diego and his sister Alicia.

The brother/sister pair are the big drug connects they’ve been searching for and they’ve finally figured out that they’ve been right there in their city this whole time. Valdes is ready to issue warrants to bring them both in Meanwhile, Mak (Sung Kang) and Saxe (Cooper Johnson) are on a private mission of their own to bring down Tommy (Joseph Sikora) and Ghost but they don’t have the information that they need to make that happen just yet. So, they arrange a visit with someone who may be able to provide them with some inside information – Tony Teresi (William Sadler), Tommy’s newfound father.

Mak and Saxe meet with Teresi in prison and offer him a deal for immediate, early release if he’s willing to play ball with them on gathering information to take down Tommy and Ghost. Ironically, Teresi tells them that this is the deal he’s been waiting for since he connected with Tommy.