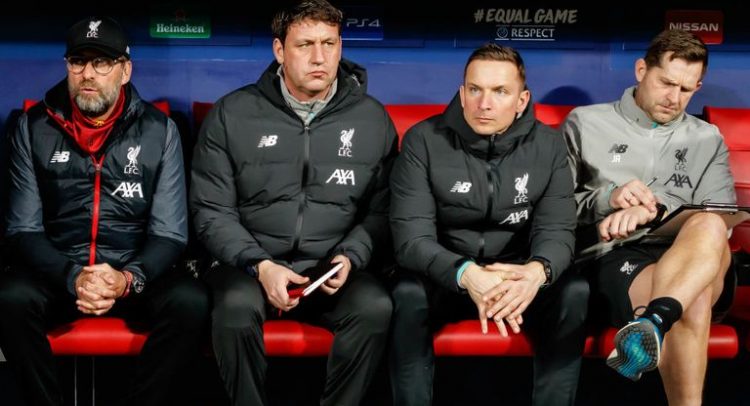 By Keith James and Geraint Hughes,

Premier League clubs will vote on how many players and staff can attend matches when shareholders meet on Thursday.

All 20 clubs have spent the last week considering a number of pre-match protocols, on accommodation and travel to away games, which are expected to be agreed during the video conference call.

The meeting will provide the last chance for a number of key issues to be resolved, with top clubs lobbying hard for their ever-increasing backroom staff to be allowed to attend away games.

Some top clubs travel with more than 60 staff and club directors, including masseurs, up to three specialist goalkeeping coaches, and security guards.

However the Premier League is keen to trim numbers to all but essential staff on match-day to just 37 ‘Red Zone’ pass holders per team, including 20 players, 12 coaching and medical staff and a further five ‘”essential staff”.

Staff not needed pitch-side, such as analysts will be allowed in the ‘Amber Zone’, with all others, e.g. security, big screen operators and parking staff in the ‘Green Zone’.

The clubs are voting on how the physical operation of a match day will work and look and how players health and safety can be managed.

Last week a vote was passed which allowed the number of substitutes to be increased from three to five along with an increase in the number of players on the bench from seven to nine in an effort to reduce to the effects of fatigue and possible injury.

Once agreed, players will be briefed by their clubs on the biggest changes to pre-match routines in Premier League history.

Agreement has already been reached on how teams travel including allowing squads to travel to games by air.

Players will maintain social distancing on flights, with the reduced travel times helping to minimise the risk of infection.

The Premier League has emphasised that wherever possible, teams should travel on the day of the game – warning about the risks involved in an overnight hotel stay.

However, it appears many managers are keen to avoid travelling on match-day, choosing instead to secure local hotel accommodation – with teams ideally being the only guests at the hotel. However, with the majority of hotels remaining closed for business, the options available to clubs have been severely limited.

Rather than the traditional team coach, clubs are expected to use at least three coaches, with players sitting two metres apart, driven by drivers who have all been tested for Covid-19 in recent days.

One Premier League club has told Sky Sports News that at least six of their staff will have to drive themselves to their first fixture, all in separate cars – despite having all tested negative for the virus.

Clubs with older stadiums, including Aston Villa, Bournemouth and Everton, are providing away teams with extra space, beyond their dressing rooms, to allow social distancing to be maintained.

The Government medical advice says: “The time spent in dressing room areas should preferably be avoided, but if not avoidable then minimised with strict social distancing.”

Showers and wet areas must be used in line with strict Government guidelines although some venues may opt to not provide shower facilities.

Because post-match interviews will now be carried out pitchside, some corridor space and tunnel areas usually used by the media, have been given over to away teams and with corporate boxes left unused, many clubs are also allowing players and staff to use them as changing areas.

Managers will be asked to keep final instructions to less than 15 minutes.