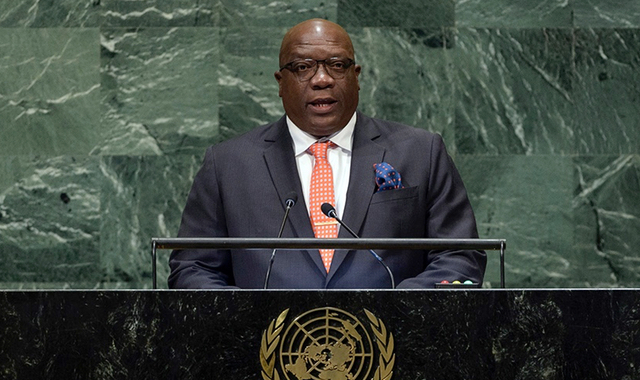 Among the issues raised by the Prime Minister were those related to health, de-risking and climate change.

Prime Minister Harris said the country welcomed the scaled up multi-stakeholder and multi-sectoral responses for the prevention and control of Non-Communicable Diseases (NCDs) spearheaded by the United Nations.

In making the point of how important it is for small states to receive such support for reducing the growth and impact of NCDs, Prime Minister Harris, who is also the lead spokesperson of health for CARICOM, offered statistical data on how the region is being impacted, saying the region was in crisis.

The Prime Minister said, “Our region remains encumbered by the unfortunate burden that NCDs have placed on our society and economy. The statistics are stark and startling. 8 out of every 10 deaths in the Caribbean are attributable to NCDs, 40% of which are premature and 70% of this number is preventable.”

Harris continued, “Hypertension is our leading risk factor for death. The Caribbean’s diabetes rate is double the global rate. We are facing an NCD crisis in our region. In this regard, we applaud the launch of the Defeat-NCDs partnership earlier this week, and CARICOM and CARPHA shall provide the fullest support to this new partnership.”

In relation to financial matters, Prime Minister Harris was critical of the practices of the developed countries on matters such as de-risking and blacklisting, calling their actions as unfair, onerous and arbitrary. He indicated that such practices were costly to developing small states.

“At great cost, my country and other small states are attempting to rise to the challenges posed by the unfair international financial architecture. However, the frequency and arbitrariness of these unilateral demands derail essential development efforts in small states. I submit to this Body that we deserve and have a right to expect fairness, transparency and consistency of treatment of all states. A clear rules based financial system, which applies to all states, must be our collective goal,” Prime Minister Harris stated.