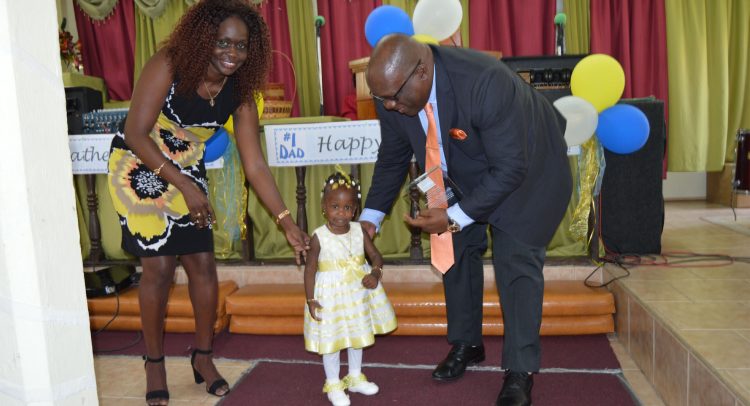 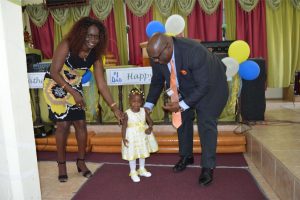 Welcoming the Prime Minister, who is also the local area Parliamentary Representative, was the Rev Ericsson Cumberbatch who is the local pastor, while the thought-provoking sermon on fatherhood was delivered by Rev Spencer Watts, District Superintendent for the Wesleyan Holiness Church in the St. Kitts and Nevis District.

Prime Minister Harris, who is the National Political Leader of the Peoples Labour Party (PLP) which is one of the three parties in the ruling Team Unity Administration, was given the task of honouring fathers who had attended the church service. He presented each of them with a certificate of recognition and a token of appreciation on behalf of the Youth Arm of the PLP, which had worked in conjunction with the church to hold the service.

The first certificate was presented to PLP’s Youth Arm Representative Mr Manasses Huggins for his tireless efforts to ensure the first PLP Father’s Appreciation event was a success. The Prime Minister also took time to thank all women who have been taking care of their children in the absence of a father figure at home. He indeed thanked all father figures in the Federation of St. Kitts and Nevis.

In a national message issued by the Prime Minister’s Press Secretary Ms Valencia Grant early Sunday morning June 17, Prime Minister Harris said: “Today, our Nation’s Fathers are being celebrated and honoured by children and families whose lives are blessed by their unfailing presence, protection and positive example.”

Dr Harris observed that as a man who was raised by highly supportive parents, and who is now the proud father of two young ladies, he understood that the consistent giving of discipline, time and love is essential to building strong, healthy parent-child relationships that can last through adulthood and adversity. He added that it is also the key to raisin children to become productive, happy and responsible adults.

It is my wish, therefore, that all the loving, dedicated fathers whom we know and pay tribute to today would find a little time to mentor other fathers and also serve as a trusted father figure whenever an adult relative of a child asks  for their help and expertise,” observed the Prime Minister. “On behalf of the Government and people of St. Kitts and Nevis, I commend and acknowledge all of our Federation’s fathers and father figures for their significant role in shaping and safeguarding our society’s future.”

In paying homage to Prime Minister Harris for being an outstanding father figure to all the youth of the Federation of St. Kitts and Nevis, Ms Trevlyn Stapleton, a member of Constituency Number Seven Branch Youth Arm of the Peoples Labour Party while quoting one Sue Skeen said: “A Father is God’s chosen one to lead the family and point it to His will for life of love and harmony.”

Head of VW's Audi arrested in Germany over diesel scandal