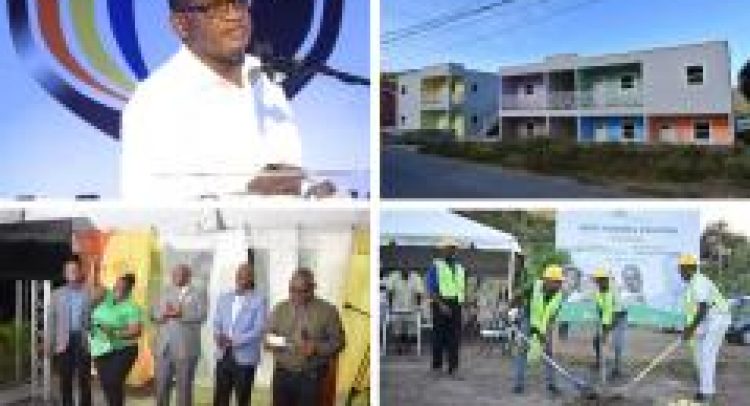 Minister with responsibility for housing the Hon Eugene Hamilton has been described, by Prime Minister Dr the Hon Timothy Harris, as a champion of the idea of Team Unity whose delivery of Unity Housing Solution produced the best performance in housing solution in St. Kitts and Nevis.

“When we started (the idea of unity) they said we will never make it, but we have made it every day – we have made it for the people of St. Kitts and Nevis,” said Prime Minister Harris on Monday evening May 25 at a Team Unity virtual public meeting. “One of the champions of the idea of Team Unity has been the Honourable Eugene Hamilton, Member for Number Eight.”

The Team Unity virtual public meeting, which was attended by the eight Team Unity candidates in St. Kitts for the June 5 General Election, was chaired by Ambassador Jonel Powell. The Hon Eugene Hamilton of the People’s Action Movement (PAM) was officially launched as Team Unity’s candidate for St. Christopher Eight.

Minister Hamilton, according to the Prime Minister, made it his duty to move around the country searching and identifying land for the build-out of homes for people who needed to get a fresh start in life, mainly the families living in overcrowded homes. Working as team player in Team Unity, Minister Hamilton provided a way for many of the identified persons to get the fresh start.

“You gave them an escape route from the landlord who was quick to receive the rent and slow to do repairs,” said Dr Harris, of Minister Hamilton. “You gave them an opportunity to raise their family in a stable environment which they can call home. You gave them an anchor, you gave them their most significant asset in life – you gave them something that they can will to their son and to their daughter. The home is a solid investment”

While the houses were built throughout the island of St. Kitts where he noted that new housing developments are in progress in West Basseterre and Challengers, Prime Minister Harris narrowed the work of the housing minister to his constituency, St. Christopher Eight, noting that in Conaree where there were limited crown lands, Hon Hamilton worked wonders in obtaining land to allow persons have the opportunity of owning a piece of the rock.

“When you went to St. Peter’s and you build more homes there in your first term than Cedric Liburd (former area parliamentary representative) ever did,” noted Prime Minister Harris. “When you saw the state of displacement of young men in St. Peter’s you came up with the apartments, special dwellings catering to their needs – studio apartment for the young men who wanted something their own and nice as we have been, in the delivery of homes you have always in a majority of cases focused on the women folks.”

Team Unity houses, added Dr Harris, are of a much higher quality and much bigger than those built by the previous administration, allowing new homeowners to bring in queen sized beds which was not possible in the old houses. The Team Unity houses are complete coming tiled, are painted and have cupboards and sinks, and a special place for the washing machine.

“That is what we have in Eugene Hamilton, a hard worker, a believer in the strong philosophy of unity, discipline, and a man who will put you first,” advised the Honourable Prime Minister. “I will be there with you the people of Number Eight to ensure that the plan that Eugene Hamilton has outlined and will continue to outline for the development of the constituency will get every dime to back it, so that he can deliver to you like never before.”