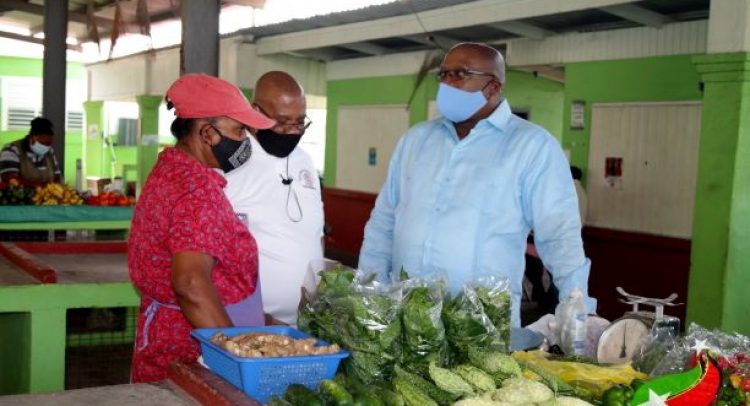 Basseterre, St. Kitts, June 17, 2021 (SKNIS): Prime Minister of St. Kitts and Nevis, Dr. the Honourable Timothy Harris, said that he is very satisfied with the vendor relocation initiative on the island of St. Christopher during his virtual forum series ‘Leadership Matters’ on June 15.

He said, “Yesterday I took the personal interest in visiting the market to see how things were going there and to speak to a number of vendors. I was very satisfied by what I saw there.”

“There are the usual hiccups in getting started from the short notice but persons were settling in and I am advised that a number of the vendors who were previously on the street have already signed up in their place for the market,” said the Prime Minister.”

Superintendent of the Police, Cromwell Henry, gave his explanation for the relocation of the vendors saying that “it is a measure to reduce the type of mingling that we see on the streets of Basseterre and so we thought that if we put them in a more centralized area, we would have better control.”

In a response to the question asked on the ventilation of the market, he said that “I would not consider the market as an enclosed space; it is very well ventilated; it is very much open and so it is not considered indoors as we know indoors to be, and so there is better control there where we have persons who are assigned specific stalls, so we have the names, we know who are assigned there, there are names taken as persons would enter, so we have a measure there for contact tracing.

Superintendent Henry also said that due to the restrictions on movement, the city of Basseterre does not see the large number of crowds it witnesses on a daily basis.

He said, “There are a reduced number of persons so there is not an overcrowding in the market and so there is better control there at the public market and so should something go wrong, we have a better opportunity for contact tracing as opposed to having persons spread throughout the streets of Basseterre.”