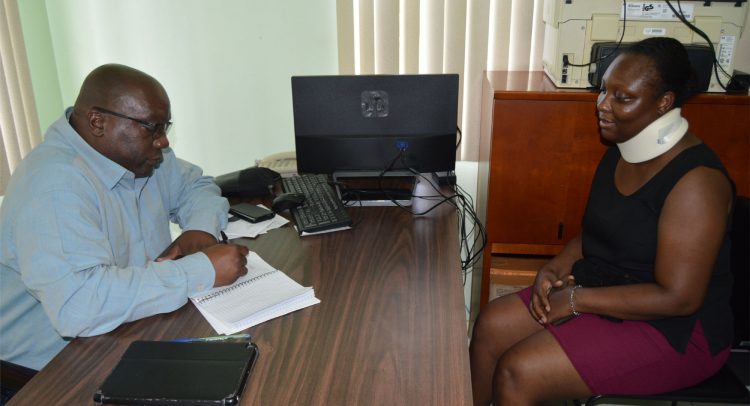 *BASSETERRE, ST. KITTS, July 19, 2018 (PLP PR Media Inc.)* — Prime Minister Dr the Hon Timothy Harris spent most of the day Wednesday July 18 executing his responsibilities as a Parliamentary Representative, by holding one-on-one consultations at the Constituency office in Tabernacle Village. A large crowd turned up and all were given the opportunity to talk to their leader, in two separate sessions.

The one-on-one consultations were primarily for residents of Tabernacle Village and the wider Constituency Number Seven which Dr Harris represents in Parliament, but a number of those who turned up came from other constituencies and were given an equal opportunity to see him. The consultations went on into early evening as the Prime Minister ensured that he saw all who had turned up.

Coordinating the consultations was the Department of Constituency Empowerment, whose representative Ms Myrtilla Williams said they were well organised. She thanked the residents of Constituency Number Seven for graciously allowing persons from outside the constituency to see the Prime Minister during the morning session, while they waited for their turn in the afternoon session.

“We saw persons from Sandy Point, Middle Island, Conaree, Basseterre, and of course those from the wider Constituency Number Seven,” noted Ms Williams. “I want to thank Ms Crystal Boyles, the secretary at the Constituency office, and Ms Jacqueline Prentice who heads the Peoples Labour Party (PLP) Protocol Desk, who ensured that persons who came in werehandled in a highly organised manner.”

Those who came for the one-on-one consultations with the Prime Minister have praised him for finding time from his official national duties to listen to their needs. Pastor Judah Payne of the Millionaire Harvest Christian Centre in Tabernacle said he was happy that the Prime Minister was able to see all the people who were waiting to have a hearing with him.

“That is how we all know him – he is for the people,” said Pastor Payne. “He has not forgotten his humble beginnings, and so that is in him. He wants to lift up people, and see them move forward. But some people when they get to such positions they forget their roots, but he (Dr Harris) has never forgotten his roots. He has not forgotten what he had to go through and so he has people because ‘People’ is his name. He is concerned about his people them… that is it about him.”

At the end of the exercise, Prime Minister Harris who is also the Political Leader of the Peoples Labour Party (PLP) one of the three parties that form the ruling Team Unity Administration thanked those who turned up, saying it was another important day of outreach to the constituency in particular, and to the citizens and residents of the country in general.

He explained that as the Parliamentary Representative it was his responsibility to make himself available for service to the constituents, and further observed that he had sought to make it convenient to hold the
one-on-one consultations in two sessions as he had to break to attend to matters of national interest.

“It was a good day in terms of the large number of persons who we were able to serve,” concluded the Prime Minister. “The day was also useful to the parties concerned as all the issues that they brought forward are issues which when properly put, the relevant government agencies and departments would be able to assist.”