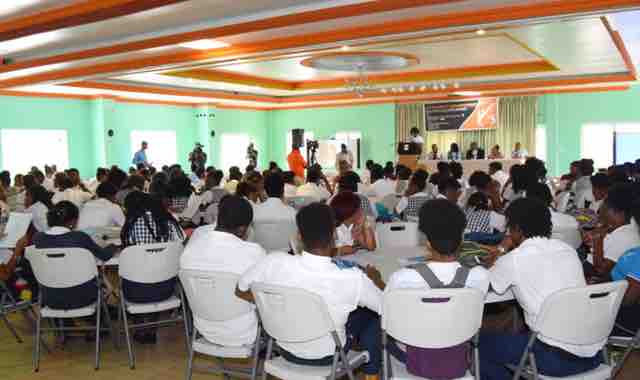 Basseterre, St. Kitts, 18th February, 2018 (MyVueNews.com) – In launching the first-ever National Volunteer Day in St. Kitts and Nevis, Prime Minister Dr. Timothy Harris said he wants citizens and residents to work with Government to help build a culture that promotes civic identity, unity, service and responsibility, and where giving is prized over receiving.

In his address to the nation on 17th February, 2018, Prime Minister Harris said, “Doing for others and donating one’s time are valued as opportunities for self-growth and community development, as well as openings to renew family and social ties.”

Earlier in the week, the Department of Youth Empowerment launched the Volunteer Corps, a service-oriented group of young people. Over 250 students from the CFB College and AVEC are already enrolled, and anyone between the ages of 16 and 35 are being encouraged to register with the Volunteer Corps.

Harris stated, “The new Volunteer Corps and National Volunteer Day initiatives are just two examples of my Government’s dedication to opening doors to a new ethos in St. Kitts and Nevis.  We are opening doors to teamwork and collaboration, to life opportunities, and for people who have traditionally been deprived.”

The two volunteer initiatives were launched as part of the third anniversary celebrations of the Team Unity Government that has implemented an extended week of activities being held under the theme, Opening Doors and Creating Opportunities Through Service and Empowerment.

In encouraging citizens and residents to pursue a lifestyle of volunteerism, the Prime Minister urged, “Let us keep in the front of our minds this Saturday, February 17th, National Volunteer Day, and each and every day, that as proud, patriotic citizens of St. Kitts and Nevis, we are all duty-bound to put ‘Country Above Self’ and the collective above individual interests.”

He said also, “Indeed, we are duty-bound to empower each other, especially the elderly, the vulnerable, the poor and infirm, knowing that a chain is only as strong as its weakest link.”

Harris concluded the the love of one’s country should steer individuals to a life of service to fellow citizens and residents.