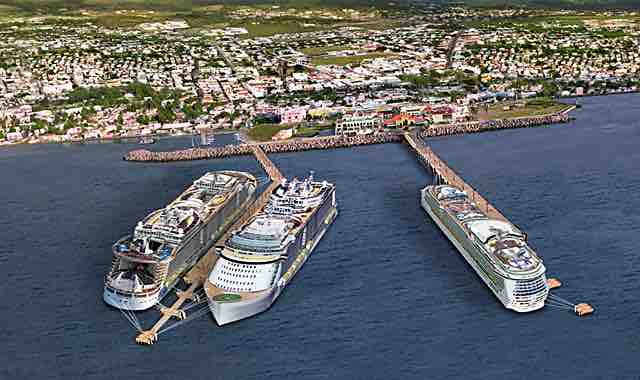 Basseterre, St. Kitts, 27th February, 2018 (MyVueNews.com) – Prime Minister Dr. Timothy Harris, at the signing ceremony for the financing of the second cruise pier at Port Zante, said the “home-grown” project should be a source of pride in the development of the country.

The ceremony was held on 26th February, 2018, near the site earmarked for the new cruise pier.

Being one of the largest public sector projects ever in the federation, at $135 million, and funded entirely by local financial and other local institutions, Prime Minister Harris, expressed thanks to those institutions for their confidence in the project.

“I want to commend all the institutions that have taken part in the financing of this project. Literally, this is a home-grown project intended for the development of our country, to put our people further ahead of others within the region and to continue the path of growth and development,” Prime Minister Harris stated.

With that kind of confidence, expressed in the financing of the project, the Prime Minister said it must be a good investment for the future growth and development of St. Kitts and Nevis, and because of that local support, we must be proud of the project.

He said, “It tells us that we must feel a sense of pride that for our major economic activity and public expenditure it is home-grown. This is what nation building must be, that within we can find resources so that our development agenda must never be strangled.”

Harris continued, “Our development agenda must always be in the hands of Kittitians and Nevisians to determine whether we go forward or we pause. When we are able to look within, rather than without for the resources, we know that we are on solid standing as a country.”

Speaking to criticism that it had taken a long time to reach the stage of signing for the project’s funding, Harris spoke of the Tea Unity Government’s commitment to good governance.

“The people are here today to witness this act,” said Harris. “All along, we have followed the rule of good governance. Indeed, we will have it no other way.”

Harris emphasised, “That is why the process had been long, and it is important for us to appreciate that sometimes when people are demanding good governance, they really do not appreciate some of what is required.”

Harris said that in good governance, there must be a transparent system in decision making.

Construction activity is expected to begin late March and take 18 months to provide a finished pier ready to dock two of the Oasis-class cruise ships, which are among the largest cruise ships in the world.

Top Photo: An illustration of the cruise pier to be constructed (left).