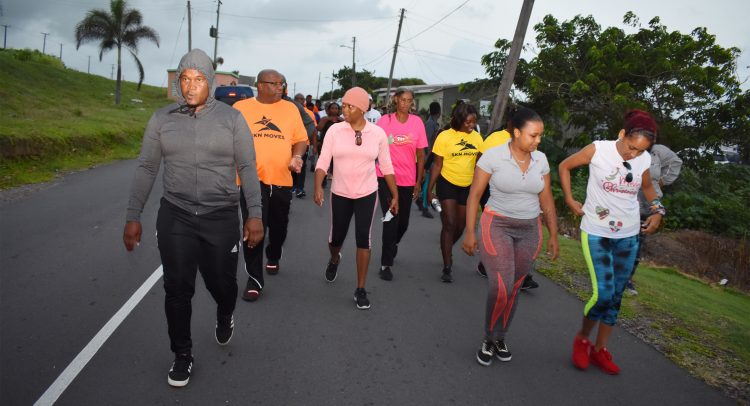 Prime Minister, Dr the Hon Timothy Harris, is once again inviting all health-conscious walk enthusiasts to join him on Saturday September 26 for the latest edition of Prime Minister’s Health Walk which will be held under the umbrella of SKN Moves.

Coming hot on the heels of the last Prime Minister’s Health Walk held on Saturday August 29 and the Caribbean Wellness Day Walk held on Saturday September 12, the walk which takes the traditional route Bellevue Village to Ottley’s Village is bound to attract many participants who are eager to have the opportunity of not only walking alongside the Prime Minister but of also chatting with him.

“These two most recent health walks had large turnouts as people took the opportunity to come out after a prolonged period of lockdown,” pointed out Prime Minister Harris. “More and more people now appreciate the health benefits of such exercises, and I am inviting all who can make it to join me this Saturday September 26 starting from Bellevue at 5:30 am.”

By participating in the walks, residents of the Federation have been benefitting from the personal efforts of Prime Minister Harris who is also CARICOM’s lead spokesman on human resources, health and HIV matters, as he has ensured that the message he delivers at the regional level is fully embraced at home. The health walks help him to accomplish that goal.

“The fight against NCDs will only be won if a collective approach is taken to make it a habit for persons to take part in regular physical activities, as they are critical for the success of the fight,” Prime Minister Harris had declared after the successful Caribbean Wellness Day Walk.

Prime Minister Harris, who had also applauded corporate entities that had encouraged their employees to take part in the walks, noted: “The more people we have involved engaging in any form of physical activity, be it walking, running, swimming or biking will result to their wellness.”

Regular Prime Minister’s Health Walk participants will be too glad to welcome other walk enthusiasts and are thankful for the expanded involvement in the exercises by the Ministry of Health under the SKN Moves umbrella noting that Minister of Health the Hon Akilah Byron-Nisbett was a regular Prime Minister’s Health Walks participant long before she became the minister.

But most the most anticipated participation is that of the Permanent Secretary in the Ministry of Health, Dr Delores Stapleton-Harris, and the Director of Community Health Services, Dr Keisha Liddie, who after the highly successful SKN Moves’ Let’s Socacise event promised that they will join Dr Harris on the Saturday September 26 Prime Minister’s Health Walk.