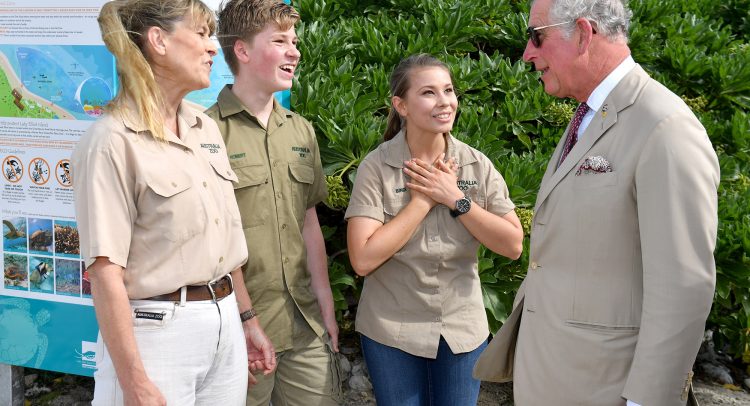 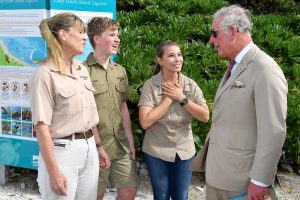 During his royal tour of Australia, Prince Charles spent the day with one of the country’s most beloved families: the Irwins.

Charles met with Bindi, Robert and Terri Irwin, the family of the late Crocodile Hunter star Steve Irwin, on Lady Elliot Island, just off the coast of Queensland, and in the heart the country’s famed Great Barrier Reef on Friday. During their visit, the foursome attended a meeting on marine life and coral resilience. And before heading into the meeting, they hung out with a few baby sea turtles.

Bindi, 19, posted to Instagram after the meeting with Charles, saying that it was a “privilege” to meet the royal.

“Our family feels extremely privileged to have had the opportunity to meet with His Royal Highness The Prince of Wales and other dignitaries today at Lady Elliot Island,” she wrote. “We joined together to discuss important methods to protect the largest living structure on Earth. The Great Barrier Reef. We must work together to make a difference and protect these sensitive ecosystems for the generations to come #RoyalVisitAustralia.”

Bindi’s younger brother, Robert, 14, also shared a photo from the visit on his own Instagram account, along with the caption: “Truly honored to meet His Royal Highness The Prince of Wales today @ladyelliotislandecoresort on the #GreatBarrierReef . It was great to speak about the conservation of this Wonder of the World with such a passionate and influential person.”

Noted turtle enthusiast Charles had a chance to greet the tiny turtles, and even took one into his hand at one point.

Charles is in Australia with his wife Camilla, Duchess of Cornwall, for a seven-day visit. Their tour started by opening the Commonwealth Games, where Charles gave a speech and delivered a message from his mother, Queen Elizabeth. Since then, they participated in the Commonwealth Games, hanging out medals to the top place finishers, and visited a rum distillery.

Can blueberries boost your memory? A closer look at the summer fruit