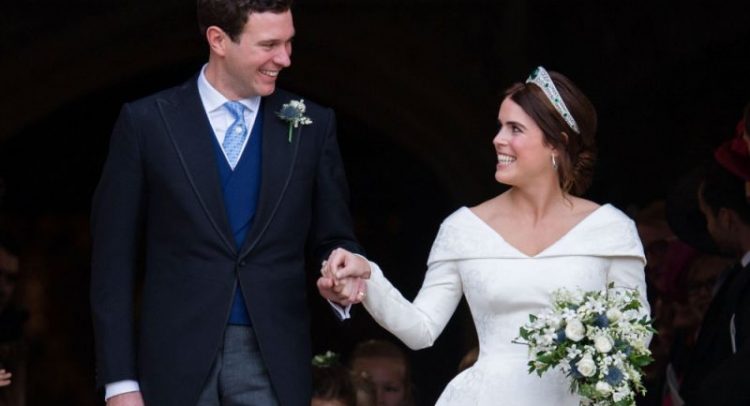 The royal couple have been basking in their post-wedding glow since tying the knot at St. George’s Chapel at Windsor Castle in October 2018

There’s another royal baby on the way — this time for Princess Eugenie and Jack Brooksbank!

The royal couple are expecting their first child together, Buckingham Palace confirmed Friday. It is due early next year.

This will be the first grandchild for Eugenie’s parents, Prince Andrew and Sarah Ferguson, and Queen Elizabeth and Prince Philip’s ninth great-grandchild.

In a statement, the palace said, “Her Royal Highness Princess Eugenie and Mr Jack Brooksbank are very pleased to announce that they are expecting a baby in early 2021.”

“The Duke of York and Sarah, Duchess of York, Mr and Mrs George Brooksbank, The Queen and The Duke of Edinburgh are delighted with the news.”

On Friday, Eugenie shared the happy news on her Instagram with a sweet post featuring the couple holding a fluffy pair of polar bear slippers, writing, “Jack and I are so excited for early 2021.

Eugenie, 30, and Jack, 34, have been basking in their post-wedding glow since tying the knot at St. George’s Chapel at Windsor Castle (the same venue for Meghan and Harry’s royal wedding!) in October 2018.

The duo met during a skiing vacation in Switzerland, they said during a pre-wedding interview for ITV’s This Morning. Although Eugenie described an immediate connection, she also quickly questioned her future husband’s fashion choices.

“I thought, ‘What a silly hat!’ ” the Queen’s granddaughter said with a laugh of seeing Jack for the first time. “And I thought, ‘Who’s that?’ ”

She continued, “And then [looking at Jack], you came over and shook my hand and I was all butterflies and nervous.”

After seven years of dating, Jack proposed during a trip to Nicaragua.

Of the proposal, Eugenie said, “The lake was so beautiful. The light was just a special light I had never seen. I actually said, ‘This is an incredible moment,’ and then he popped the question, which was really surprising even though we have been together seven years.”

The couple currently lives together at Ivy Cottage on the grounds of Kensington Palace, just steps Prince William and Kate Middleton‘s home with their three children.

Ahead of Eugenie and Jack’s nuptials, Fergie already had grandchildren in mind. Appearing on the BBC program The One Show in August, the Duchess of York was asked how she felt about becoming a grandparent someday.

“Excellent! They are thrilled because I write children’s books and I’m a child, I haven’t grown up,” she said excitedly on the chat show.

In recent months, the family has been shaken by scandal — Eugenie’s father Prince Andrew “stepped back” from his royal role in November 2019 following the backlash surrounding a bombshell BBC interview about his ties to Jeffrey Epstein.

In the disastrous interview, Prince Andrew discussed his years-long friendship with Epstein and the sexual abuse allegations of Virginia Roberts (now Virginia Giuffre). Giuffre’s accusations, which the prince denies, mentioned coercion to have sex with the royal three times between 1999 and 2002 in London, New York and on a private Caribbean island owned by Epstein, starting when she was just 17 years old.

The Queen’s second son was widely criticized for not showing empathy for the victims of Epstein — who died by suicide in jail in New York City in August while awaiting trial on multiple sex charges — and for his decision to stay with at the financier’s New York home in December 2010. That came just months after Epstein had served 13 months of an 18-month sentence for procuring a minor for prostitution.

The scandal regained momentum in January after a U.S. attorney said the 60-year-old royal has provided “zero cooperation” with authorities and the FBI in the ongoing investigation.

2 charged for handling of virus outbreak at veterans home