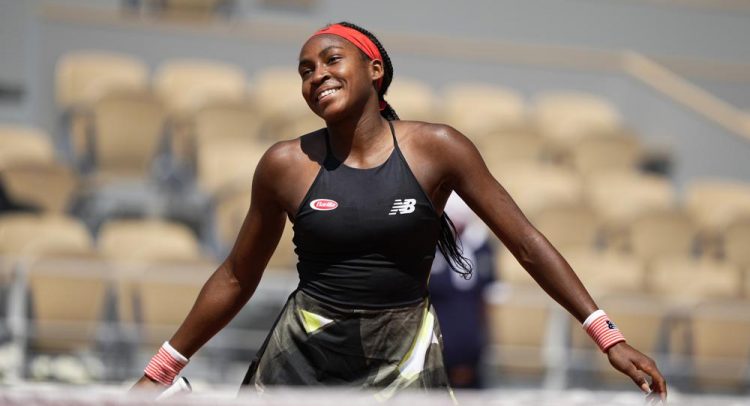 By SAMUEL PETREQUIN and ANDREW DAMPF

PARIS (AP) — If Coco Gauff keeps playing like this, she’s going to go from teenage prodigy to Grand Slam champion in a hurry.

The 17-year-old American completely overwhelmed Ons Jabeur in a 6-3, 6-1 victory at the French Open on Monday to become the youngest woman to reach the quarterfinals at any Grand Slam tournament in 15 years.

Gauff lost only nine points on her serve and was also highly effective at the net, winning 13 of 17 points when she came forward — which was especially impressive against a player who is known for her shot-making skills.

“I feel like this has been the most consistent tennis I have played at this level,” Gauff said. “Hopefully I can keep that going.”

“She’s young, she’s amazing, she’s coming up. She’s going to be the next star,” Krejcikova said of Gauff.

Gauff also had a quick match in the previous round, when Jennifer Brady retired with an injured left foot after Gauff won the opening set.

Jabeur said Gauff is a contender to raise the trophy — either this year or in the future.

It wouldn’t be the first time Gauff claims a title at Roland Garros, having won the girls’ singles title in 2018.

Gauff already announced herself as a contender to become the next great American player when she made a run to the fourth round at Wimbledon as a 15-year-old qualifier two years ago. Now, having gone one step further, she became the youngest American to reach a Grand Slam quarterfinal since Venus Williams did it at 17 at the 1997 U.S. Open.

Gauff has not dropped a set in Paris this year. She won both the singles and doubles titles at a warmup tournament in Parma before coming to Paris. That came after a run to the semifinals of the Italian Open.

In all, she’s on a career-best nine-match winning streak.

“Parma gave me a lot of confidence, especially on the clay,” Gauff said. “It taught me a lot about how to close out matches and deal with the pressure on important points.”

Exactly 40 years to the day after Bjorn Borg won the last French Open match of his career for his sixth title in Paris, his son, Leo, won his very first junior match at Roland Garros.

For Leo, it’s already too late to match his father’s precocity. Aged 18, Leo has yet to win a professional match on the main tour. Bjorn Borg had just turned 18 when he won his first French Open title.

“I was having a hard time when I was a bit younger,” Leo said when asked about the huge expectations linked to his name. “Now I’m getting used to it, I can control it more. But it’s going to be following me all my tennis career. It’s not bothering me.”

Leo started playing tennis when he was 6 years old but said he did not train seriously until he was 14 when he quit soccer. He made his professional debut in February last year and said his “lowest goal” is now to make it to the Top 10 at some point.

After spending three weeks training at the Rafa Nadal Academy in Spain last year, he returned to Sweden to work with his long-time coach at the Royal Tennis Club. His father occasionally gives him a few tips but doesn’t get mixed up with his son’s training.

“The best advice he gave me is to have things organized,” he said. “To have everything in life organized.”

In addition to his six Roland Garros titles, Bjorn Borg also won five times on the Wimbledon grass. After initially being drawn to hard-court tennis, Leo said his best surface is going to be clay because it’s better suited to his game.

On Monday, he progressed to the second round of the boys’ tournament with a 3-6, 6-3, 6-4 victory over Frenchman Max Westphal. Their match on Court 14 drew fans cheering loudly for both players.

“It was a great crowd, very loud, and a great feeling,” he said.

Leo’s father will arrive in Paris later this week and the teenager hopes he will still be in the fray at that stage so that Bjorn — who celebrated his 65th birthday this week — can watch him play.

To the beach! Spain opens borders to tourists, cruise ships