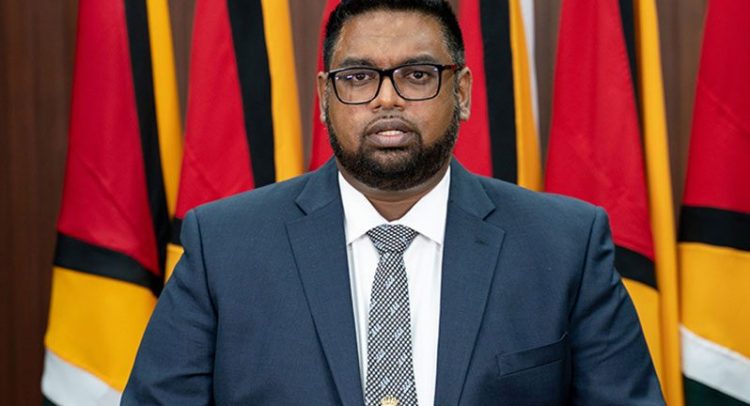 –says President Ali, highlights need to honour those who show courage, fearlessness, and strength in championing this cause

A PROSPEROUS Guyana is only possible with the preservation and strengthening of democracy and democratic systems, President Dr. Irfaan Ali has said.
“If we are to ensure that political, civil, and human rights are protected, if our one Guyana is to prosper, then we must preserve and strengthen our democracy,” the President reasoned in a message to the nation on Tuesday.
Democracy is crucial for businesses to thrive, for the attraction of investments, and for the social progress and economic prosperity of the nation. It is also the basis for upholding the rule of law; separating the powers of the government, the legislature, and the judiciary; for ensuring the expression of the will of the people through free and fair elections; and for an electoral process uncontaminated by corruption.

“Without democracy, dictatorship would rule, placing power not in the hands of the people, where it properly belongs, but in the clutches of a few to be abused for their own purposes,” President Ali warned.
Guyanese and people the world over watched last year as this sacred tenet of society was threatened by the actions of the former A Partnership for National Unity and Alliance For Change (APNU+AFC) coalition administration in the aftermath of the March 2, 2020 election.
The electorate, after casting their votes on March 2, 2020, had to endure an unimaginable wait for the results of the General and Regional Elections, as they witnessed unlawful acts and a slew of legal challenges.
In this time, the patience of the electorate was tested, as they observed an attempt by the then incumbent APNU+AFC coalition to rip the democratic fabric of the nation with “delay tactics” which were openly criticised by a wide section of society.

A DARK TIME
“We experienced a dark time when we were made to walk through a deep valley in which the shadow of autocracy at home, and ostracism from abroad hung over us.
“We escaped that awful fate because brave men and women of all races, ages, and political persuasion stood up to defend democracy, and to resist stolen elections and autocratic and illegitimate government,” President Ali said.

Those “guardians of democracy” eschewed racial bigotry for national cohesion, and refused to still their voices, all in an effort to protect Guyana from an internal threat.
“In saving the international standing of our country while preserving our rights and self-respect at home, they showed loyalty to One Guyana, One People, One nation, a principle to which I, as President, am firmly committed, and which I want to recognise and honour on behalf of a grateful nation. I therefore propose a special Order of Democracy, to honour these individuals,” President Ali said.

The Order, he explained, will not only honour the patriots of 2020; it will honour all in the future who preserve the nation’s democracy, people’s freedom, and the right to have the national will expressed at free and fair elections justly conducted without corruption.
“Integral to that process is honouring, now and forever, those who show courage, fearlessness, and strength in standing up for democracy. We must hold up high our heroes of democracy, so that its flame never flickers or fades in the hearts and minds of our people. This is why today I propose the establishment of the category of the Order of Democracy,” the Head-of-State related.

Honouring the protectors of democracy forms a vital part of the President’s overarching aim of ensuring he builds a Guyana where the citizens live as one.
“That is why I have resolved that we live in One Guyana, as One People, with no group more entitled than another, and no individual more deserving than any other, except by virtue of diligence, manifest talent, and commitment to the national good. That is the Guyana we must uphold and sustain.
“I want to ensure that we, as One People, One Nation in our One Guyana, cherish and defend democracy in the interest of all our people. I want this generation to ensure that democracy is preserved for us, and that it is never lost for future generations. They set aside political differences,” President Ali affirmed.
Like Freedom Fighters Nelson Mandela, Mahatma Gandhi, and Martin Luther King, he, too, believes in equality and justice, in freedom and multiracial democracy, built on the premise that all people are created equal.
The President recently established a One Guyana Commission, which is headed by the Prime Minister, Brigadier (ret’d) Mark Phillips.

INCLUSION
“An essential part of my government is inclusion. Stop being defined by race; stop being defined by politics. Start being defined by our one nationality, and by our common love for our one country; let us lift it up together, and by doing so, let us lift each other and ourselves, one people, one nation, one destiny.
“I propose to give meaning to my call for One Guyana, by requesting the Leader of Government business in the National Assembly, Prime Minister Brigadier, Hon. Mark Phillips to introduce the adoption of an Act of Parliament establishing a One Guyana Commission, which he will head,” Dr. Ali said in a recent report.
He said the work of the Commission will encapsulate the free expression of all voices, respecting the diversity “from which our oneness springs”.
The Commission will also address education related to Guyana’s history, religion, ensuring equal opportunity, employment and entrepreneurship and institutional strengthening of the Ethnic Relations Commission.

SIX BILLS FOR FIRST READING AND FIVE FOR SECOND READING IN NATIONAL ASSEMBLY ON THURSDAY, MARCH 4