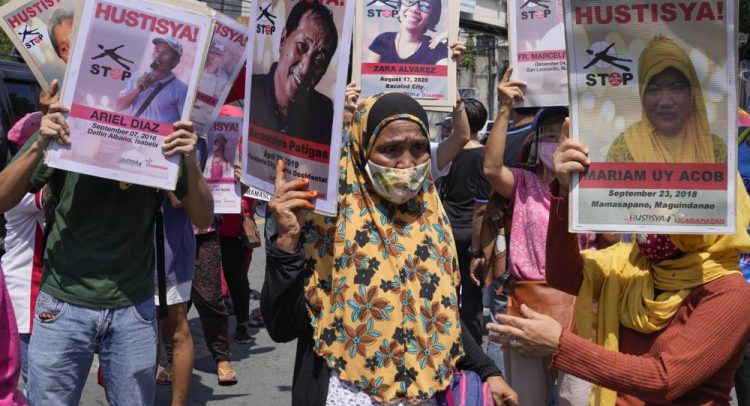 MANILA, Philippines (AP) — Left-wing activists and relatives of people killed in Philippine President Rodrigo Duterte’s anti-drug campaign marked the start of his last year in office Wednesday with a noisy protest and a “countdown toward achieving justice.”

Riot police prevented more than 150 flag-waving protesters from approaching the presidential palace in Manila. The demonstrators dispersed peacefully after less than an hour and police made no arrests despite a ban on such gatherings under COVID-19 restrictions.

“We count 365 days left in his reign of terror,” protest leader Renato Reyes said. “We want to mark this as a countdown toward achieving justice and accountability.”

The protesters held placards that read “Stop the killing, prosecute Duterte.” Others carried a mock coffin, while several family members displayed portraits of mostly young people they said were victims of extrajudicial killings in the drug crackdown.

Duterte’s anti-drug campaign, in which thousands of mostly petty drug suspects have died since he took office in June 2016, has alarmed human rights groups and prompted several people to file complaints with the International Criminal Court.

“My appeal to the ICC is please don’t abandon us,” said Emily Soriano, whose 15-year-old son died in the crackdown. “ICC is the only one which can hold Duterte accountable for all that he did here in the Philippines in his war on drugs.”

The International Criminal Court’s outgoing chief prosecutor said this month that a preliminary examination found reason to believe crimes against humanity had been committed during the crackdown. The prosecutor sought authorization to open a formal investigation and the court’s judges have 120 days to decide.

Duterte, a 76-year-old former mayor who made a name in politics with his extra-tough approach to crime, has denied condoning the murder of large numbers of drug suspects but has openly threatened drug dealers with death. He said suspects were killed after they violently resisted arrest, although human rights groups have reported cases of police killing unarmed suspects and then altering the crime scene to make it appear the suspects opened fire at them.

Duterte has said he would never cooperate in a possible ICC investigation.

Protesters hold pictures of alleged victims of extra-judicial killings during a rally outside the Malacanang palace in Manila, Philippines on Wednesday, June 30, 2021. The group has called for justice and accountability for the thousands who have died due to the government’s anti-drug crackdown under the administration of Philippine President Rodrigo Duterte. (AP Photo/Aaron Favila)