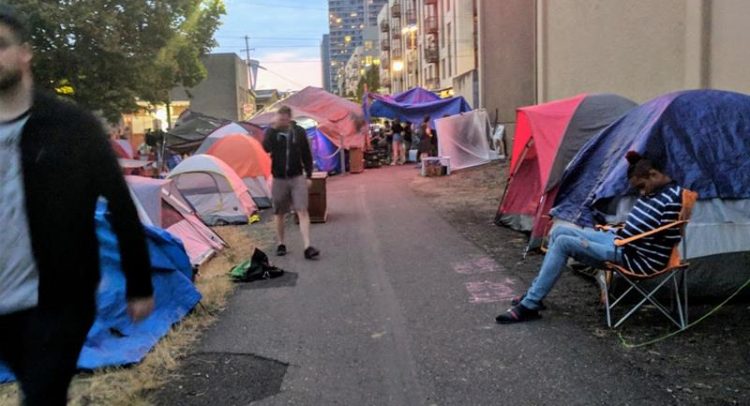 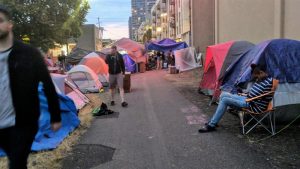 Dozens of protesters have occupied the grounds of the local US Immigration and Customs Enforcement (ICE) office in Portland, Oregon to protest the Trump administration’s immigration policies, including the separation of thousands of children from their parents at the US-Mexico border.

The group, calling it itself #OccupyICEPDX, set up camp on Sunday, calling for the abolition of ICE and an end to government’s “zero tolerance” approach to immigration.

The protesters vowed to remain on Thursday after it successfully shut down the office a day earlier.

Since the camp was erected, up to 400 people have shown up for nightly vigils.

Individuals stand by the road holding signs such as “Everyone is Welcome Here”, “Stop Child Abuse – Abolish Ice” and “Close the Trump Concentration Camps”.

Roberta, who asked not to use her surname, held a sign reading: “Truth, Freedom, and Justice for all.”

She told Al Jazeera: “We’ve gotten lots of honks and only a few fingers.”

#OccupyICEPDX comes amid a widespread outcry over the government’s “zero tolerance” approach towards migrants and refugees who cross the US southern border without documents. The approach included a practice of separating children from parents who were held.

After repeatedly saying only legislators could end the controversial tactic, US President Donald Trump signed an executive order on Wednesday, to keep families together. It remains unclear, however, what will happen to the children who have already been separated from their families.

According to the Associated Press, about 500 of the 2,300 children separated have been reunited with their parents, but it was not clear if they remained in detention.

While the executive order ends the separation of families, many fear the practice will only shift to detaining families for long periods of time – a tactic likely to be challenged in the courts.