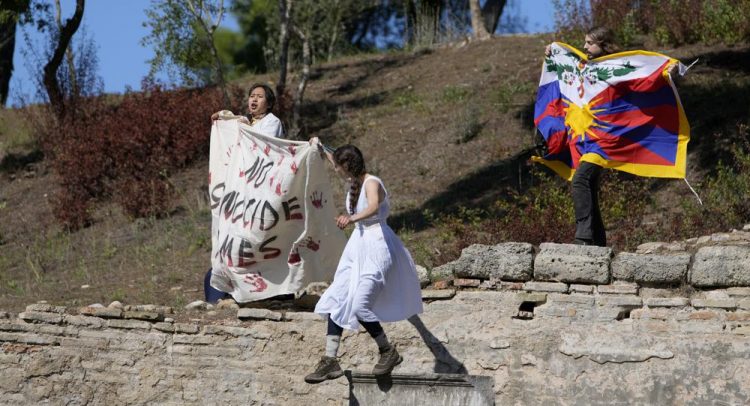 By NICHOLAS PAPHITIS and THANASSIS STAVRAKIS

ANCIENT OLYMPIA. Greece (AP) — Three activists protesting human rights abuses in China sneaked into the archaeological site where the flame lighting ceremony for the 2022 Beijing Winter Olympics was being held Monday and ran toward the newly lit torch holding a Tibetan flag and a banner that read “No genocide games.”

The protesters managed to enter the grounds and attempted to reach the Temple of Hera, where the ceremony was being held. They were thrown to the ground by police and detained.

“How can Beijing be allowed to host the Olympics given that they are committing a genocide against the Uyghurs?” one protester said, referring to the treatment of Uyghur Muslims in China’s northwest region of Xinjiang.

The flame was lit at the birthplace of the ancient Olympics in southern Greece under heavy police security.

With the public excluded amid pandemic safety measures, and a cloudless sky over the verdant site of Ancient Olympia, the flame was ceremoniously kindled using the rays of the sun before being carried off on a mini torch relay.

Earlier, other protestors were detained by Greek police before they could reach the site. Pro-democracy protests also had broken out during the lighting ceremony for the 2008 Beijing Summer Games.

Despite widespread international criticism of China’s human rights record, the International Olympic Committee has shied away from the issue, saying it falls outside its remit.

In his speech in the ancient stadium of Olympia, where in antiquity male athletes competed naked during a special truce among their often-warring cities, IOC President Thomas Bach stressed that the modern Games must be “respected as politically neutral ground.”

“Only this political neutrality ensures that the Olympic Games can stand above and beyond the political differences that exist in our times,” he said. “The Olympic Games cannot address all the challenges in our world. But they set an example for a world where everyone respects the same rules and one another.”

Tibetan rights activists said in a press release that China was trying to “sportswash” its human rights abuses “with the glamour and veneer of respectability the Olympic Games brings.”

Commenting on the protest, the Greek national Olympic committee said that while it respects freedom of expression, “it is disappointing that this traditional cultural event has been used by a few individuals for other purposes.”

Beijing will become the first city to have hosted both winter and summer Olympics.

In a tightly choreographed performance shortly afterwards, a Greek actress playing the part of a pagan priestess knelt to light the Olympic flame, using a bowl-shaped mirror to focus the sun’s rays on a fuel-filled torch.

Standing in front of the few remaining columns of the ruined, 2,600-year-old Temple of Hera, she offered a symbolic prayer for the ancient Greek god of light, Apollo, to light the flame.

“Mountains fall silent, birdsong cease,” she intoned as a TV drone buzzed overhead and ranks of photographers clicked their shutters.

Yu Zaiqing, the vice president of the Beijing organizing committee, said the Games brought “confidence, warmth and hope” during the pandemic, which first appeared in China.

“We can and will deliver a streamlined, safe and splendid Olympic Games to the world,” he said.

Police were much in evidence at and around the archaeological site where the ancient Games were held from 776 BC and for more than 1,000 years, until the Christians stamped them out. Anyone heading for the venue had to have an accreditation and pass through checkpoints and metal detectors.

On Sunday, two protesters were detained on the Acropolis in Athens trying to raise a banner to draw attention to human rights abuses in China.

The Olympic flame will be taken to Athens and handed over to Beijing organizers on Tuesday at the renovated stadium where the first modern Olympics were held in 1896.

The Beijing Winter Games will run from Feb. 4-20. Only spectators from mainland China will be allowed to attend. Everyone at the Olympics — including athletes — will be expected to be vaccinated, or else have to spend 21 days in quarantine.

Protesters displaying a Tibetan flag and a banner reading “No genocide games” enter the grounds during the lighting of the Olympic flame at Ancient Olympia site, birthplace of the ancient Olympics in southwestern Greece, Monday, Oct. 18, 2021. The flame will be transported by torch relay to Beijing, China, which will host the Feb. 4-20, 2022 Winter Olympics. (AP Photo/Thanassis Stavrakis)