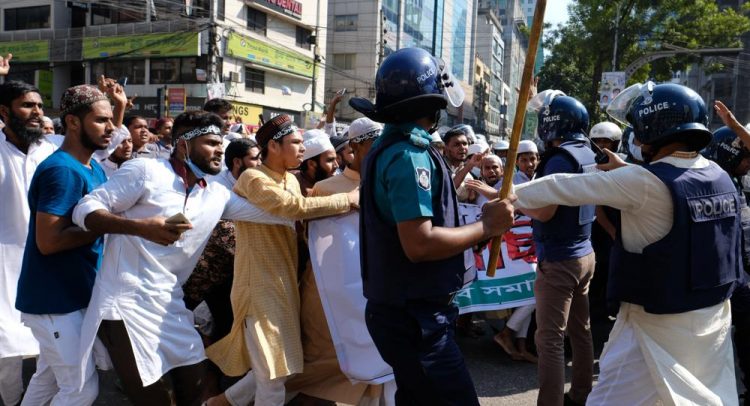 DHAKA, Bangladesh (AP) — Thousands of protesters in Bangladesh’s capital Friday clashed with police as security forces used tear gas and batons against demonstrators angry over what they perceived as an image insulting Islam that had gone viral over social media.

Imagines purportedly showing a copy of the Quran — Islam’s holy book — at the feet of a statue in a Hindu temple in eastern Bangladesh have triggered incidents of vandalism at Hindu temples across other parts of the Muslim-majority country.

The rise in communal tensions came as the minority Hindus celebrated the last day of their largest religious festival — the Durga Puja.

Police said the street protests began after the main Friday prayers at the Baitul Mukarram mosque in the center of Dhaka.

Sajjad Hossain, a deputy commissioner of the Dhaka Metropolitan Police, said several people were injured after the police charged with batons and tear gas to disperse the crowd, which was attempting to break through a police barricade.

“They started pelting stones at us, they attacked us,” Hossain said. At least three protesters were detained for questioning, he said.

Bangladeshi authorities have ordered an investigation into the image of Islam’s holy book placed in the temple, while Hasina has warned against any attempts to disturb communal harmony. But Hindu organizations said the attacks continued in other parts of the country where dozens of Hindus were injured and their temple statues vandalized or toppled.

Since Wednesday, at least 100 people had been arrested across the country in connection with attacks on Hindu temples, authorities said. Around 9% of Bangladesh’s more than 160 million people are Hindu.

Police clash with Muslim devotees during a protest over an alleged insult to Islam, outside the country’ main Baitul Mukarram Mosque in Dhaka, Bangladesh, Friday, Oct. 15, 2021. Friday’s chaos in Dhaka followed reported incidents of vandalism of Hindu temples in parts of the Muslim-majority Bangladesh after photographs of a copy of the Holy book Quran at the feet of of a Hindu Goddess went viral on social media in a temple at Cumilla district in eastern Bangladesh. (AP Photo/Mahmud Hossain Opu, File)