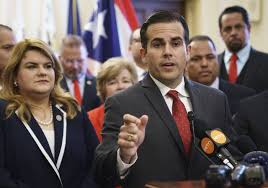 Puerto Rico’s non-voting representative in Congress is introducing a Bill that seeks to make the US territory a state by 2021.

Resident Commissioner Jenniffer Gonzalez said Wednesday that 14 Democrats and 20 Republicans currently sponsor the Bill among the 435 members in the House of Representatives.

“This is the first step to open a serious discussion regarding the ultimate status for the island,” Gonzalez said.

However, the chances for the passage of the Bill are not clear.

The Bill calls for the creation of a bipartisan, nine-member task force that would submit a report to Congress and to the president identifying laws that would need to be amended or repealed so Puerto Rico could become a state. The panel would also be instructed to recommend temporary economic measures to help the island of Puerto Rico in the transition to statehood.

Puerto Rico has been a US territory since 1898. Its inhabitants are US citizens, though they are barred from voting in presidential elections and have only one congressional representative with limited voting powers.

Governor Ricardo Rossello said the island’s unequal status is the cause for 5.4 million Puerto Ricans to currently reside in the continental US, a trend exacerbated by the damage inflicted in September by Hurricane Maria.

“In the past this issue has been very hard to move forward,” Rossello said. “No longer do we want ambiguity. We want clarity. Either here in Congress you are with us or you are against the people of Puerto Rico.”