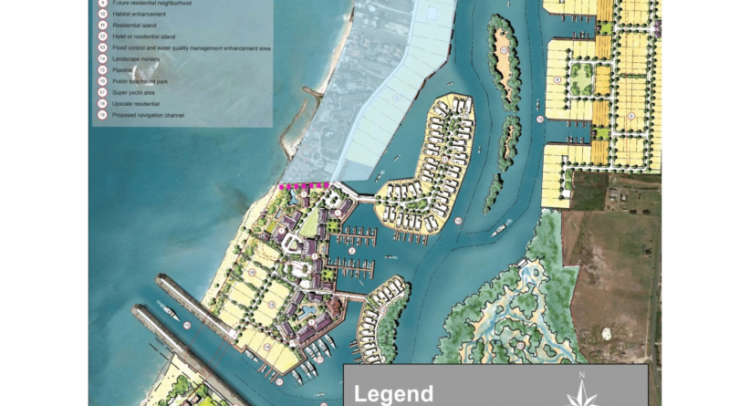 Environmental enthusiasts are welcoming a near $100 million Marina planned for the McKinnon’s area but are questioning what measures will be put in place to protect wildlife and natural habitats in the area.

The project is being proposed Francis Hadeed, Aziz Hadeed, Andrew Hadeed and other members of the Hadeed family through a company, Co-ventures and Developers limited.

The company is seeking to develop the wetland and environs of the McKinnon’s Pond into a major high-end, ultra-luxury tourism zone. The development will include 200-slip campers marina, a 125-room five-star hotel, a casino, 100 private residences in a gated community and will be called the Runaway Beach Development Project.

Former Health Inspector of Antigua and Barbuda Lionel Michael said while the Environmental Assessment Impact Assessment (EIA) detailed the situation at McKinnon’s and a full description of the project, very little was mentioned in terms of the environmental impact, specifically wastewater, solid waste, and air quality.

“I do not see anything about how the project will contribute to existing air quality during and after the project. How will the project impact solid waste generation after completion? How that waste will be stored and collected?” Michael said.

He made reference to another project — the Cooks Sanitary Landfill in the Grays Green community and the odour and other problems that are affecting residents — as a prime example.

Gameal Joyce, a member of the Democratic National Alliance questioned what role will the different stakeholders play in the implementation of the project, how will it affect residents in the area, and what role will the West Indies Oil Company Limited (WIOC) play.

“Yes, it is viable and it is something that we need as a growing tourism destination, but because of past mistakes and our bad habits, I do not see it working out as it is on paper,” Joyce said during an interview on Sunday’s Big Issues programme.

“This marina is directly downwind from WIOC and if there is a hazard how will this impact WIOC and how involved are the government agencies to supervise this and put control measures in place?” Whener queried.

The Department of Environment has published the full EIA on its website. The document will be the subject of public consultation within the coming weeks.

Britain's William and Kate to begin 'complex' tour of Pakistan