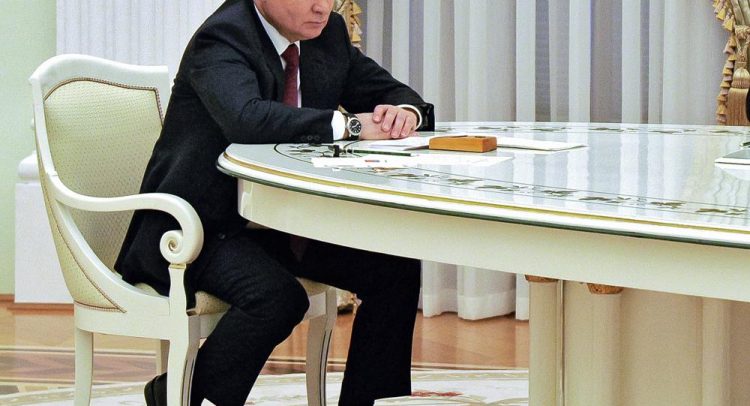 The Kremlin is seeking legally binding guarantees from the U.S. and NATO that Ukraine will never join the bloc, deployment of NATO weapons near Russian borders will be halted and the alliance’s forces will be rolled back from Eastern Europe.

The demands, rejected by NATO and the U.S. as nonstarters, come amid fears that Russia might invade Ukraine, fueled by the buildup of an estimated 100,000 Russian troops near Ukraine’s borders. Talks between Russia and the West have so far failed to yield any progress.

All eyes were on Putin as he hosted Hungarian Prime Minister Victor Orban in the Kremlin, telling the Hungarian leader he would brief him about the talks with the West on Russia’s security demands. Putin has not spoken about the issue since late December. Orban, in turn, stressed that no European leader wants a war in the region.

Washington has provided Moscow with a written response to Russia’s demands, and on Monday three Biden administration officials said the Russian government sent a written response to the U.S. proposals. A State Department official declined to offer details, saying it “would be unproductive to negotiate in public” and that Washington would leave it up to Russia to discuss the counterproposal.

But Deputy Foreign Minister Alexander Grushko on Tuesday told Russia’s state RIA Novosti news agency that this was “not true.”

Kremlin spokesman Dmitry Peskov told reporters that there had been “confusion” and that Russia’s response to the U.S. proposals is still in the works and will be formulated by Putin.

RIA Novosty cited an unnamed senior diplomat in the Russian Foreign Ministry as saying that Foreign Minister Sergey Lavrov sent letters to his Western colleagues, including U.S. Secretary of State Antony Blinken, about “the principle of indivisibility of security” contained in an international document signed by all members of the Organization for Security and Cooperation in Europe.

Russia has argued that NATO’s expansion eastward has hurt Russia’s security, violating the principle that the security of one nation should not be strengthened at the expense of others.

On Monday, Russia accused the West of “whipping up tensions” over Ukraine and said the U.S. had brought “pure Nazis” to power in Kyiv as the U.N. Security Council held a stormy debate on Moscow’s troop buildup near its southern neighbor.

U.S. Ambassador Linda Thomas-Greenfield shot back that Russia’s growing military force along Ukraine’s borders was “the largest mobilization” in Europe in decades, adding that there has been a spike in cyberattacks and Russian disinformation.

The harsh exchanges in the Security Council came after Moscow lost an attempt to block the meeting and reflected the gulf between the two nuclear powers. It was the first open session where all protagonists in the Ukraine crisis spoke publicly, even though the U.N.’s most powerful body took no action.

Lavrov and Blinken were expected to have a phone call, and British Prime Minister Boris Johnson was scheduled to meet with Ukrainian President Volodymyr Zelenskyy in Kyiv.

He noted that Russia’s neighbors feel like they are living “next to a volcano.”

“You can’t express solidarity with Ukraine while also working to certify the Nord Stream 2,” the Polish prime minister said. “By allowing the pipeline’s launch, Berlin would hand Putin a gun he could then use to blackmail the entire of Europe.”

Zelenskyy said Ukraine would forge a new trilateral political alliance with Britain and Poland, hailing it as a reflection of strong international support for Ukraine.

The Ukrainian president signed a decree on Tuesday expanding the country’s army by 100,000 troops, bringing the total number to 350,000 in the next three years, and raising army wages.

Zelenskyy, who in recent days sought to calm the nation in the wake of fears of an imminent invasion, said Tuesday that he signed “this decree not because of a war.”

“This decree is so that there is peace soon and further down the line,” the president said.

The decree ended conscription starting from Jan. 1, 2024, and outlined plans to hire 100,000 troops over the next three years.