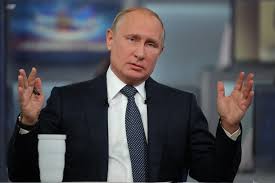 Putin says Russia not yet planning to withdraw from Syria

President Vladimir Putin said on Thursday Russia was not planning to withdraw from Syria for now, adding that the military would stay there for as long as it was in Russia’s interest.

“We are not yet planning a withdrawal of these military forces,” Putin told a televised phone-in session.

Putin also said there was no need for any major military operations in Syria involving Russia’s armed forces and that Russia could leave the country quickly if necessary.