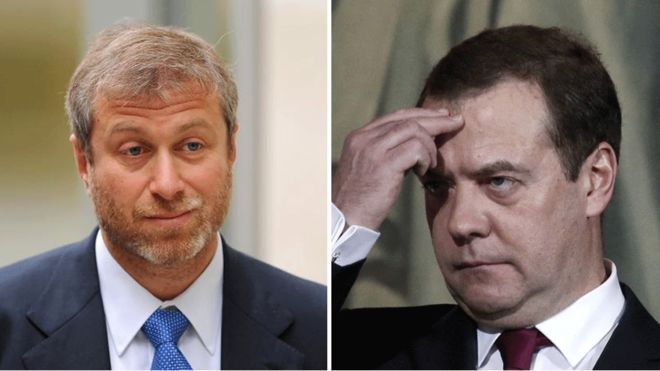 Russian President Vladimir Putin says a list of officials and businessmen close to the Kremlin published by the US has in effect targeted all Russian people.

The list names 210 top Russians as part of a sanctions law aimed at punishing Moscow for meddling in the US election.

However, the US stressed those named were not subject to new sanctions.

Mr Putin said the list was an unfriendly act that complicated US-Russia ties but he said he did not want to escalate the situation.

Mr Putin said Russia should instead be thinking about “ourselves and the economy”.

The government was required to draw up the list after Congress passed the Countering America’s Adversaries Through Sanctions Act (Caatsa) in August.

The law aimed to punish Russia for its alleged meddling in the 2016 US presidential election and its actions in Ukraine.

Congress wanted the list to name and shame those who had benefited from close association with President Putin and put them on notice that they could be targeted for sanctions, or more sanctions, in the future.

President Donald Trump did not support Caatsa, even though he signed it into law, saying it was “unconstitutional”.

Under the law, the list had to be delivered by Monday. The fact it was released about 10 minutes before midnight may reflect Mr Trump’s coolness towards it, and his opposition to punishing more Russians with sanctions.

The top Democrat on the House Foreign Affairs Committee, Eliot Engel, accused the Trump administration of letting “Russia off the hook again” by not taking substantial action.

Who has been named?

Informally known as the “Putin list”, the unclassified section has 210 names, 114 of them in the government or linked to it, or key businessmen. The other 96 are oligarchs apparently determined more by the fact they are worth more than $1bn (£710m) than their close ties to the Kremlin.

Most of Mr Putin’s longstanding allies are named, many of them siloviki (security guys). They include the spy chiefs Alexander Bortnikov of the Federal Security Service (FSB) – which Mr Putin used to run – and Sergei Naryshkin of the Foreign Intelligence Service (SVR).

The oligarchs include Kirill Shamalov, who is reported to be Mr Putin’s son-in-law, although the Kremlin has never confirmed his marriage to Katerina Tikhonova, nor even that she is the president’s daughter.

Internationally known oligarchs are there too, such as those with stakes in top English football clubs: Alisher Usmanov (Arsenal) and Roman Abramovich (Chelsea).

Will they face new sanctions?

It adds: “Neither does inclusion on the unclassified list indicate that the US government has information about the individual’s involvement in malign activities.”

However, there is a classified version said to include information detailing allegations of involvement in corrupt activities.

What does it mean for Russia’s elite?

The good news for the Kremlin: this isn’t a sanctions list. But the good news ends there.

Those Russian officials and oligarchs named by the US Treasury will worry that their inclusion could signal sanctions in the future.

Even before the list was made public, the Kremlin had claimed the US Treasury report was an attempt to meddle in Russia’s presidential election.

Moscow won’t want that to become a Who’s Sanctioned.

What is the Caatsa act and did the president want it?

The law limited the amount of money Americans could invest in Russian energy projects and made it more difficult for US companies to do business with Russia.

It also imposed sanctions on Iran and North Korea.

In signing the act, Mr Trump attached a statement calling the measure “deeply flawed” and said he could make “far better deals with foreign countries than Congress”.

Earlier on Monday, the US government argued the Caatsa law had already pushed governments around the world to cancel deals with Russia worth billions, suggesting that more sanctions were not required.

How have the Russians reacted?

Perhaps referring to the fact that all of their political representatives had been named, Mr Putin said that, in effect, “all 146 million Russians have been put on the list”.

He joked he was offended not to be named himself.

Earlier, Kremlin spokesman Dmitry Peskov, who is himself on the list, accepted that it was not one of sanctions but said it could potentially damage “the image and reputation” of figures listed and their associated companies.

He added: “It’s not the first day that we live with quite aggressive comments made towards us, so we should not give in to emotions.”

When Caatsa was passed, PM Dmitry Medvedev said it meant the US had declared a “full-scale trade war” on Russia.

Russian opposition leader Alexei Navalny praised the publication of the names as “a good list”.

Labour MP implies talks with Speaker a waste of time