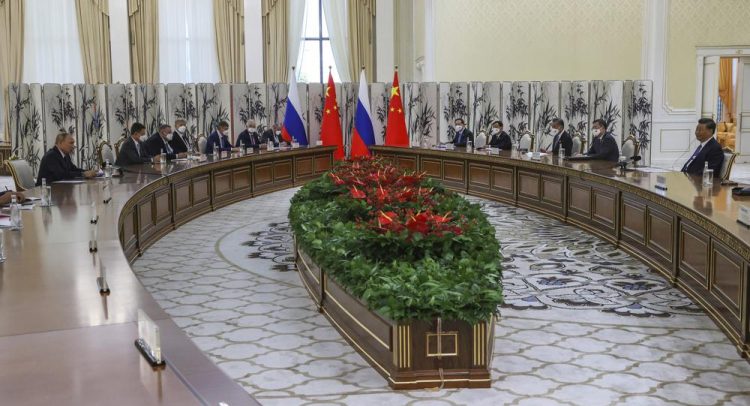 SAMARKAND, Uzbekistan (AP) — Russian President Vladimir Putin thanked Chinese leader Xi Jinping on Thursday for his “balanced” approach to the Ukrainian crisis and blasted Washington’s “ugly” policies at a meeting that followed a major setback for Moscow on the battlefield.

Speaking at the start of talks with Xi in Uzbekistan, Putin said he was seeking to assuage unspecified “concerns” by China about Ukraine.

“We highly appreciate the well-balanced position of our Chinese friends in connection with the Ukrainian crisis,” Putin said, facing Xi across a long table.

“We understand your questions and your concerns in this regard, and we certainly will offer a detailed explanation of our stand on this issue during today’s meeting, even though we already talked about it earlier,” he added.

The two met on the sidelines of the eight-nation Shanghai Cooperation Organization that includes India, Pakistan and four ex-Soviet nations in Central Asia. The security alliance was created as a counterweight to U.S. influence.

A Chinese government statement issued after the meeting didn’t specifically mention Ukraine, but said Xi promised “strong support” to Russia’s “core interests.” While the statement gave no details, Beijing uses “core interests” to describe issues such as national sovereignty and the ruling Communist Party’s claim to Taiwan over which it is willing to go to war.

Xi’s government, which said it had a “no limits” friendship with Moscow before the Feb. 24 invasion of Ukraine, has refused to criticize Russia’s military actions. Beijing and India are buying more Russian oil and gas, which helps Moscow offset Western sanctions imposed over the invasion.

Observers say that Russia will likely grow increasingly reliant on China as a market for its oil and gas as the West moves to establish a price cap on Russian energy resources and potentially cut their imports altogether.

In trying to strengthen an alliance with China, Moscow has strongly backed Beijing amid tensions with the U.S. that followed a recent visit to Taiwan by U.S. House Speaker Nancy Pelosi.

“We condemn the provocations of the U.S. and its satellites in the Taiwan Strait,” Putin told Xi.

Along with Russian’s attack on Ukraine, the summit is taking place against the backdrop of hostilities between Armenia and Azerbaijan not far from Uzbekistan, as well as strains in China’s relations with Washington, Europe, Japan and India due to disputes over technology, security and territory.

Speaking at the start of his one-on-one talks with Xi, Putin blasted efforts by the United States and its allies to dominate global affairs.

“Attempts to create a unipolar world have recently taken an absolutely ugly shape. They are absolutely unacceptable for the vast majority of countries on the globe,” he said in opening remarks.

“The tandem of Moscow and Beijing plays a key role in ensuring global and regional stability,” Putin said. “We jointly stand for forming a just, democratic and multipolar world based on international law and the central role of the United Nations, not rules invented by some who try to enforce them on others without explaining what they are.”

Xi was more careful, saying that “in the face of changes in the world, times and history, China is willing to work with Russia to reflect the responsibility of a major country, play a leading role and inject stability into a troubled and interconnected world.”

SCO summit in the ancient city of Samarkand is part of Xi’s first foreign trip since the start of the coronavirus pandemic 2 1/2 years ago, underscoring Beijing’s desire to assert itself as a regional power.

The meeting came after Russia was forced to pull back its forces from large swaths of northeastern Ukraine last week amid a swift Ukrainian counteroffensive. Ukraine regaining control of several Russian-occupied cities and villages represented Moscow’s largest setback since its forces had to retreat from areas near the capital early in the war.

Putin also met with Iranian President Ebrahim Raisi, whose country is on track to join the Shanghai Cooperation Organization. Raisi said Moscow and Tehran were finalizing a major treaty that would bring their relations to a “strategic level.”

He and Putin both criticized the U.S. at the start of their meeting. Raisi accused the U.S. of breaching its obligations under Iran’s nuclear deal with world powers. Putin gibed American officials, saying “They are masters of their word — they give it and then take it back whenever they want.”

There was no indication whether Modi would meet Xi. Relations between India and China are strained due to clashes between the countries’ soldiers from a border dispute involving a remote area of the Himalayas.

Putin also is scheduled for a one-on-one meeting with Turkish President Recep Tayyip Erdogan and President Ilham Aliyev of Azerbaijan. Turkey and Azerbaijan have the status of “dialogue partners” with the SCO.

Earlier this week, Azerbaijan and Armenia engaged in cross-border shelling that killed 176 troops on both sides, the most serious hostilities in nearly two years between the decades-long adversaries. The fighting has put Moscow, which has tried to maintain close ties with both countries, in a precarious position.

Putin’s meeting with Erdogan will be closely watched for their statements on Ukraine and a July deal brokered by Turkey and the U.N. to clear the way for exports of grain and other agricultural products that were stuck at Ukraine’s Black Sea ports after the invasion.

The Chinese leader is promoting a “Global Security Initiative” announced in April following the formation of the Quad by the U.S., Japan, Australia and India in response to Beijing’s more assertive foreign policy. Xi has given few details, but U.S. officials complain it echoes Russian arguments in support of Moscow’s actions in Ukraine.

The region is part of China’s multibillion-dollar Belt and Road Initiative to expand trade by building ports, railways and other infrastructure across an arc of dozens of countries from the South Pacific through Asia to the Middle East, Europe and Africa.

China’s economic inroads into Central Asia have fueled unease in Russia, which sees the region as its sphere of influence.

Xi visited Kazakhstan on Wednesday en route to Uzbekistan. Pope Francis was in Kazakhstan, but they didn’t meet.