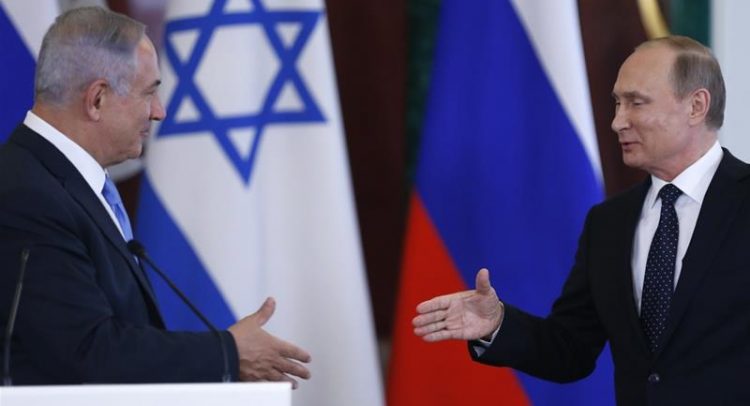 Putin’s meeting with Netanyahu at 16:00 GMT on Wednesday in Moscow will centre on the conflict in Syria and Iran’s role in the war-torn country, according to news reports and the Israeli government.

“This is very important for the national security of the state of Israel,” Netanyahu told reporters at an airport in Tel Aviv before leaving for Moscow, according to an official transcript.

Israel deeply resents Iran’s presence in Syria, where Tehran has military presence along with Moscow, which intervened in the eight-year-old conflict in 2015.

Israel considers the presence of Iranian-linked armed groups in Syria and neighbouring Lebanon as a security threat.

Sites belonging to Iran and its regional ally, Hezbollah, have been bombed by the Israelis in recent years, with the latest attack carried out in May this year.

A top foreign policy adviser of Iran’s Ayatollah Ali Khamenei, Ali Akbar Velayati, is expected to arrive on Wednesday to deliver an “important message” to Putin from the Supreme Leader, according to the Iranian Labour News Agency.

Al Jazeera has learned that Velayati will meet Putin on Thursday, and will stay for another day to hold other meetings with Russian officials.

Iran or its proxies

An Iranian foreign office spokesman said that the visit was in line with Tehran’s diplomatic outreach after the US pulled out of the Iran nuclear deal.

“After Donald Trump’s strategic mistake to exit the multilateral and international accord, the JCPOA, the Islamic Republic of Iran decided to dispatch a number of its special representatives to other countries,” Iranian foreign ministry spokesman Bahram Qassemi said, referring to the Iran nuclear deal.

“Velayati’s visit to Moscow would also take place in line with such a policy and he would also travel to China,” he said.

Qassemi said the meeting between Putin and Velayati “can be very important”.

As the situation in southern Syria deteriorates, operations have drawn uncomfortably close to Israel’s border with the country.

Times of Israel also said that during his meeting with the Russian leader, Netanyahu is expected to reiterate Israel’s position that it “will not tolerate a military presence by Iran or its proxies anywhere in Syria, and that Syria must strictly abide by the 1974 Separation of Forces Agreement”.

On Wednesday, Russian Defence Minister Sergei Shoigu was quoted by the Italian newspaper Il Giornale as saying that Iran has a key role in Syria’s stability.

Russia and Iran have joined forces to support the regime of Syrian President Bashar al-Assad.

Moscow has managed to maintain its relationship with Israel, despite its dominant role in the complex conflict.

In May, Netanyahu also held talks with Putin to dissuade Moscow from supplying Syria with the surface-to-air S-300 missiles.

Putin had urged Netanyahu to avoid any steps that could escalate tension in the region.

The Russian leader’s meetings on Wednesday and Thursday also come just days ahead of his highly-anticipated summit with US President Donald Trump in Helsinki, the capital of Finland.

What to know about breastfeeding