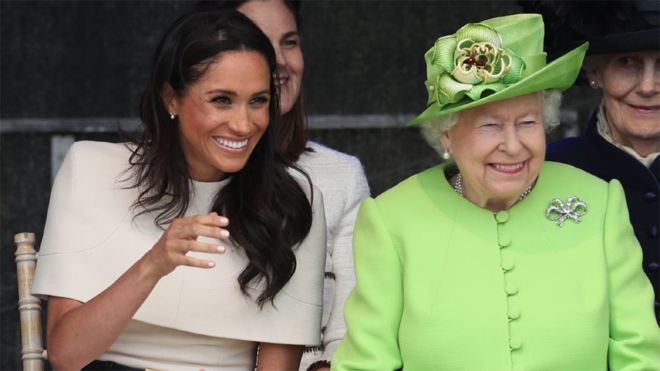 The Queen and Duchess of Sussex are in Cheshire for their first royal engagement together.

They then attended a lunch at Chester Town Hall as guests of the city council.

It is the first time the duchess has attended an event with the Queen without her husband Prince Harry.

Thousands of people were already waiting at the venues hours before the royal pair arrived, with stalls set up on the streets selling flags and souvenirs.

The Queen, wearing green in honour of Grenfell Tower fire victims on the first anniversary of the tragedy, and duchess were greeted by hundreds of cheering schoolchildren as they stepped off the royal train at Runcorn station.

Lord-Lieutenant of Cheshire David Briggs MBE welcomed Meghan as she left the train, saying: “Welcome to Cheshire. I understand this is your first visit to northern England.”

Abigail Grimes, a pupil at Runcorn’s Beechwood Primary School, was chosen to present the duchess with a posy of flowers as it was the youngster’s fifth birthday.

The Queen, wearing a Stewart Parvin outfit and matching hat by Rachel Trevor Morgan, was given flowers by Jack Jackson, 10, from St Michael’s Catholic Primary School in Widnes.

Grange Hill and Brookside creator Phil Redmond and wife Alexis, the High Sheriff of Cheshire, were among those gathered to greet the royals.

Mr Redmond joked he should have asked the US-born former actress Meghan if she wanted a part in his soap Hollyoaks.

“I didn’t ask her, but there’s still lunch yet. She’ll have to go through the audition process like everybody else.”

Mrs Redmond said: “It’s fantastic to have them here and it’s a big day for Cheshire.”

It was a joyous afternoon in Chester for those who had taken to the streets with the hope of seeing the Queen and her granddaughter-in-law. Just before the royal party left the Storyhouse, the sun broke through the clouds much to the delight of the waiting crowds.

There were huge cheers as the Queen took to one side of the crowd and the Duchess to the other.

Meghan seemed like a natural in her new royal role and looked genuinely happy as she stopped to chat and shake hands with those assembled; many of them hadn’t expected she would have time to speak to them and were visibly moved.

The younger visitors in particular were charmed with Meghan – one group of children were gleefully telling their parents how they felt like they were now famous because the duchess had noticed them.

During the visit to the bridge the royals met architects, planners and community representatives and watched a performance from local schoolchildren before Her Majesty unveiled a plaque to mark the opening.

The bridge between Runcorn and Widnes was opened in October and has been subject of fierce debate over its tolls.

The Queen and the duchess then headed to Chester where they had a tour of the Storyhouse Theatre.

The £37m theatre opened in May 2017 following a two-and-a-half-year project to transform the city’s former Odeon cinema.

They saw performances from a theatre company for people in recovery from addiction.

The Duchess of Sussex has taken part in royal engagements since her wedding but this was arguably her most important yet – accompanying the Queen on a day of visits.

They arrived in Cheshire on board the royal train before visiting the new Mersey Gateway Bridge and Chester.

Thousands of people waited at the venues hours in advance to try and get a view of the pair.

Stalls selling flags and souvenirs were also set up on the streets of Chester and schoolchildren greeting the Queen and duchess eagerly awaited the royal visitors early this morning.

Alison Green, 49, who is originally from the UK but now lives in Virginia, USA, said: “I landed yesterday to see mum and dad and decided to come down today.

“I’m mainly looking forward to seeing Meghan as I want to make my friends at home jealous!”

Sarah Howlett, from Chester, was delighted to get the opportunity to speak to the duchess.

“I said ‘welcome to Chester’ and she said ‘thank you the weather is beautiful’.

“She was very natural, very beautiful and very friendly. It felt like she wanted to give all her time to people.”

Lisa Sanders, who is from Great Sutton, was with her daughter Sarah to see the royals and got to shake hands with the new duchess who told them Chester was a “lovely place”.

“She was fantastic, so natural. I said hello and I couldn’t believe she shook hands with us.”

Many of the younger well-wishers were charmed by the duchess.

Inese Williams, 33, from Blacon, says her sons with Noah, four and Ollie, two, had waited excitedly since 09:00 BST for a royal wave.

Michael Leatherbarrow, 31, a restaurant manager from Liverpool, took the day off work to see the Queen.

“I’m a massive royal fan and I love everything they do for the Commonwealth.

“I last saw the Queen at Lime Street station two years ago.”

Holly Richards, 22, a student from Chester, also took a day off from university to catch a glimpse of the Queen and the duchess.

Excitement building for the 2018 National Championships This Weekend