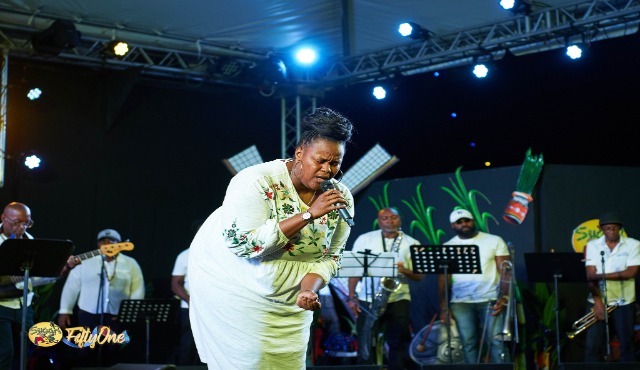 Basseterre, Friday, 30th December, 2022, (My Vue News.com) –The female calypsonians in St. Kitts are continuing to demonstrate that, not only have they arrived, but they have attained a position of dominance over their male counterparts.

This power of the woman calypsonian was again reinforced on Thursday night, 29th December, 2022, when Karissa Willett, known in calypso circles as Queen Independent, upstaged four other former crown winners, to be crowned the new Calypso Monarch of St. Kitts & Nevis.

Since securing her place in history as the first female to win the title in 2017, (and again in 2018), Independent has maintained a strong ranking in her cultural field. This time around, she edged out her closest rival, King Socrates, by only 9 points, to capture the title, (for the third time), in front of a fair-sized crowd at the Warner Park Cricket Stadium.

She amassed 827 points, compared to Socrates’ 818 points, to gain the approval of the judges, after she delivered her two composition pieces, titled, “The Cure” and “Flashlight”.

It was a competition final with 10 contenders, five of whom were females.

Others seeking the crown were former Monarchs, Astro, (who was defending) and King Craig. Also in the final were King Hollywood, Queen Kibi, Empress Lyrics, and King Honesty.

Other carnival events still on the roster are the Carnival Day Parade of Troupes and Bands, (2nd January), and Last Lap, (3rd January). The Children’s Carnival parade will be staged on Saturday, 31st December, Old year’s Day.