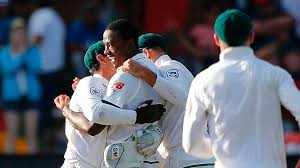 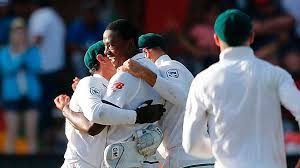 Kagiso Rabada will play in the Cape Town Test after his two-match ban for making physical contact with Steven Smith was overturned by the ICC’s code of conduct appeal commissioner Michael Heron.

After a hearing via video conference lasting more than six hours on Monday, in which Rabada’s case was championed by the high-profile South African legal advocate Dali Mpofu, his level 2 charge for physical contact was downgraded to a level 1 charge for conduct contrary to spirit of the game, with a 25% match fee fine and one demerit point, instead of the three he had initially been given by the match referee Jeff Crowe.

This means Rabada’s demerit points total dips below the threshold bringing an automatic ban, allowing him to play at Newlands. Rabada, the captain Faf du Plessis and the team manager Mohammed Moosajee all took part in the hearing.

The full judgment made by Heron, a notable New Zealand QC, is expected to be released by the ICC shortly, with Rabada to train with his team-mates at Newlands later on Tuesday.

In his judgment, Heron said that he was not satisfied that Rabada’s physical contact with Smith matched the “inappropriate and deliberate” definition covered by the ICC code of conduct.

“The key issue is whether Mr Rabada made ‘inappropriate and deliberate physical contact’ with Mr Smith,” Heron wrote. “I am not ‘comfortably satisfied’ that Mr Rabada intended to make contact and I therefore find him not guilty of the charge under 2.2.7.

“I am entitled, however, to consider whether the conduct involved constitutes a lower level offence. I consider the conduct was inappropriate, lacked respect for his fellow player and involved non-deliberate and minor contact. The actions contravened the principle that a dismissed batsman should be left alone.

“I consider a penalty of the imposition of a fine of 25% of the applicable match fee to be the appropriate penalty for the breach of Article 2.1.1. As a consequence, 1 demerit point accrues. Mr. Rabada will be well aware of the consequences of any further breaches of the code.”

The ICC chief executive David Richardson said that the governing body accepted the decision to overturn the ban and would not be appealing. “The ICC wholly accepts today’s decision and I would like to thank Mr. Heron for overseeing the hearing in a short time frame before the next Test starts in South Africa,” he said.

“This is perhaps an opportune moment to remind all players of their responsibilities to maintaining a standard of behaviour which sets a good example to players at all levels of the game, especially the young players. We want to see the game played with skill, passion and respect for the opposition, the match officials and the laws.”

The incident took place in the first innings of the Port Elizabeth Test when Rabada made contact with Smith’s shoulder after trapping him lbw. At that time, It handed him three demerit points, taking his total to eight within 24 months, which leads to a two-Test ban according to the ICC’s rules.

Rabada appealed against his suspension and the ICC appointed Heron, who is a judicial commissioner for New Zealand Rugby and SANZAAR (the body which operates rugby competitions between South Africa, New Zealand, Australia and Argentina), and is also a member of the ICC’s code of conduct commission and dispute resolution committee.

Rabada currently sits on seven demerit points because he started with five before the Port Elizabeth Test and collected one for the Smith dismissal and one more for the David Warner send-off in the second innings.

“I would particularly like to thank our legal team, led by Advocate Dali Mpofu and supported by the legal firm of David Becker and Associates, for the job they have done after having to accept the brief at unavoidably short notice,” CSA acting chief executive Thabang Moroe said. “This is our first ICC appeal that has been successful.

“It is now important that everybody gets the focus back where it belongs on the game of cricket. We have witnessed a compelling series between two highly competitive and skilful teams that is locked 1-1 at the halfway stage and is attracting a global audience.”