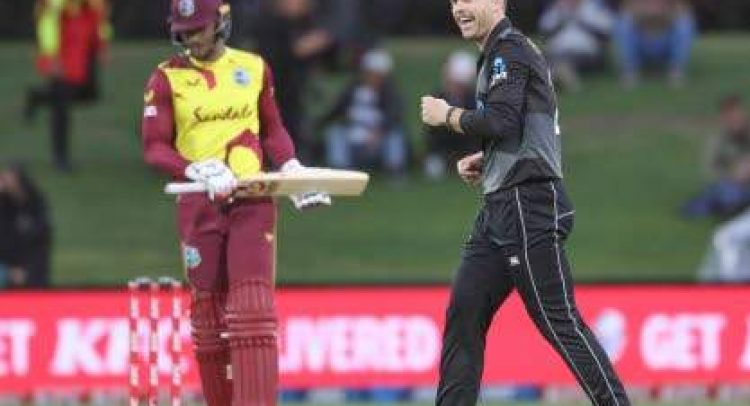 MOUNT MAUNGANUI, New Zealand (CMC) — Torrential rain prevented West Indies from salvaging pride, and they had to settle for a no-result against New Zealand in the final Twenty20 International (T20I) of their three-match series yesterday.

Only 2.2 overs were possible before heavy showers swept across the Bay Oval and forced the players and umpires to leave the field.

The Windies were 25 for one, with opener Andre Fletcher not out on four and left-hander Kyle Mayers not out on five after they were put into bat.

The result meant that the Caribbean side lost the series 2-0, after tumbling to a five-wicket defeat under the Duckworth/Lewis/Stern Method in the first T20I this past Friday at Eden Park in Auckland and a 66-run defeat the previous day at Bay Oval.

West Indies Captain Kieron Pollard said his side was obviously disappointed with the way they played and the outcome of the series.

“As a unit, we didn’t expect to be outplayed this badly,” he said. “The onus was on us to compete and win the series.

“The conditions are totally different to where we come from. We didn’t have enough time to practise, to get middle wicket practice and stuff like that, which is why it’s been hard to win in New Zealand.”

Pollard said the players on the Windies team also needed to work hard on their attitude to fielding because it will be a vital component to the visitors’ long-term success.

“Fielding is an attitude,” he said. “That’s the only time it’s 11 versus two on the park. And if you don’t show the intent to want to do it, it’s going to be difficult. So, as individuals we have to look in the mirror.

“We don’t want to feel like laughing stocks in the dressing room. We have an opportunity now to think about it and come back. Next year is very crucial with the World Cup coming up, so if players don’t show that attitude, they may get the boot.”

The match started brightly for the Windies when the New Zealanders’ stand-in captain, Mitchell Santner, bowling his left-arm spin, conceded four wides down the leg side with the first delivery of the match.

Things continued to flow smoothly for the Caribbean side when opener Brandon King started positively with a six over extra cover off the fourth ball of the over from Santner.

Next over, King followed up with a boundary to third man off the first ball from Ferguson before he edged a loose drive at the next delivery and was caught in the same position for 11.

Kyle Mayers, promoted to three, announced himself with a four off the next delivery to the fine leg boundary, and Fletcher followed up with a boundary to the same position off the inside edge two balls later.

The pair would have been hoping to build from there but the weather intervened after two balls in the next over from Hamish Bennett, and it never relented to give the visitors a chance at redemption.

Attention now turns to the two Tests between the two teams. The first starts on December 3 at Seddon Park in Hamilton and the second on December 11 at Basin Reserve in Wellington.

B King c Neesham b Ferguson 11

K Mayers not out 5