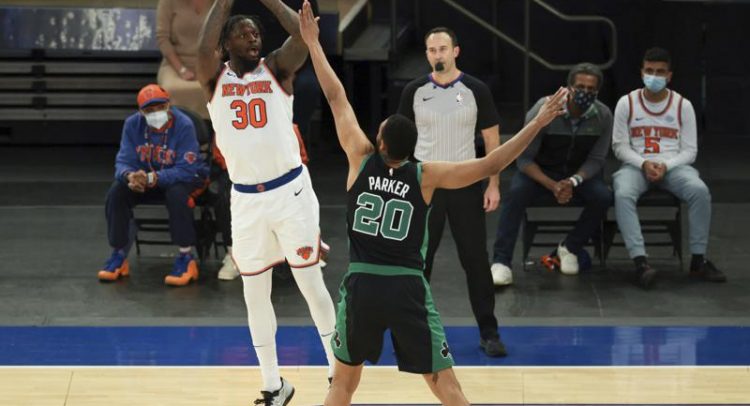 Randle, Harden the keys for a playoff run, or 2, in New York

NEW YORK (AP) — James Harden was the final piece to a Big Three. Julius Randle is an unquestioned No. 1.

Their status may not be the same, but there’s no difference in what their teams need for there to be a deep playoff run — or two of them — in New York.

Randle is ready for the challenge, as the Knicks face Atlanta in their return to the postseason for the first time since 2013.

He led the Knicks in points, rebounds and assists, not to mention the entire NBA in minutes.

Harden long faced the same need to carry his club in Houston. He doesn’t have to shoulder as much of a load after joining Kevin Durant and Kyrie Irving in Brooklyn, but he doesn’t think that makes his job any easier.

The second-seeded Nets went 48-24 in one of the best seasons in franchise history. They will be favored not only to dispose of Boston in the first round, but perhaps to make it all the way to the NBA Finals.

The reality, though, is they were a mostly mediocre team without Harden.

The Nets were 29-7 in games that Harden played after his arrival in a mid-January trade and just 12-11 when he didn’t. For as great as Durant and Irving are, Brooklyn was only 10-8 for the season when those two played in a game and Harden didn’t.

Brooklyn was 24-5 when Harden played with at least one of the other two All-Stars. So much for the theory before the trade that the Nets had enough talent already and shouldn’t give up too much to get him.

They might have been good without Harden, but they weren’t going to be championship contenders.

The three-time scoring champion averaged 24.6 points, 10.9 assists and 8.5 rebounds with the Nets, tying Jason Kidd’s franchise record with 12 triple-doubles. Figuring out how to blend his game with the Nets after eight seasons in Houston was even more impressive given the limited practice time and constant lineup changes Brooklyn had.

Durant, his teammate in Oklahoma City, wasn’t surprised, given Harden’s experience and intelligence.

“So we’re going to keep building as a group, but him individually as a player, he’s so smart and so well-traveled in this league that I knew that he’d start to connect with us as individuals, his teammates, pretty fast,” Durant said.

Randle needed more time to make his mark in New York after a rocky first season in 2019-20. His game took off this season under Tom Thibodeau, when Randle evolved from a scoring power forward to a do-everything point forward.

He averaged 24.1 points, 10.2 rebounds and 6.0 assists, one of just six players ever to reach those totals. He shot 41% from 3-point range, perhaps the most notable leap in a season that could land him the Most Improved Player award.

Across town, Harden’s coach was impressed with the way Randle elevated the Knicks.

“Becoming a 40 percent 3-point shooter definitely expands your game in a lot of ways, allows him to be more of a playmaker, more efficient, be a bigger matchup nightmare for people because he can stretch the floor,” Steve Nash said. “So I think his growth has been a catalyst in their growth and their success this year.”

It particularly showed against Hawks, against whom Randle had a pair of 40-point games. Atlanta will surely make limiting him a priority, but the Knicks have seen Randle come through too many times to think he can’t now.

“Definitely have confidence in Julius,” center Nerlens Noel said. “I know he’s a baller, so he’ll be ready to go regardless.”