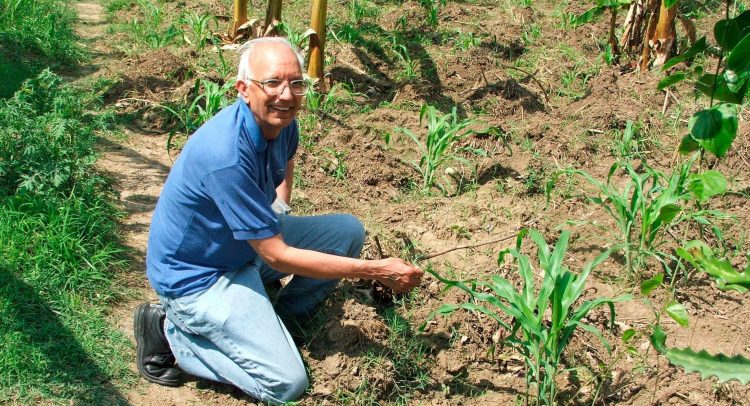 San Jose, 2 December 2020 (IICA) – Distinguished Professor Rattan Lal and the Inter-American Institute for Cooperation on Agriculture (IICA) will launch the “Living Soils of the Americas” initiative, as a means of uniting public and private efforts in the fight against soil degradation – a phenomenon that threatens to undermine countries’ capacity to sustainably meet the food demand.

“Living Soils of the Americas” will be spearheaded by IICA and the Carbon Management and Sequestration Center (CMASC) at Ohio State University, which is managed by Rattan Lal. This ambitious international initiative will serve as a bridge between science, the public policy sphere and development work in the field to restore soil health in the Americas.

To this end, and using the most advanced management strategies, technical cooperation will work with governments, international organizations, universities, the private sector and civil society organizations to assist in slowing land degradation and agricultural processes that are depleting organic matter in soils.

Soils are an essential natural resource for human development and maintaining the health of cultivated land is one of the most important challenges for agriculture in the Americas.

As such, IICA, as an agricultural development specialist agency tasked with protecting the well-being of rural populations in the Americas, will work with CMASC and their partners to provide support in areas such as policy formulation, land management practices and incentives to transform agricultural systems into ecosystems that capture more carbon in the soils. This will pave the way for implementation of the best management methods and development of public policies and regulations, with a view to restoring soil health and quality.

Speaking on the initiative, Rattan Lal remarked that, “We are going to promote conservation agriculture in the region. This will help us to restore soil functions and soil health. We want to discover where we need to adopt better technology; to assess the restoration rate; and to determine soil carbon’s impact on productivity, sustainability and most of all, on resilience to extreme climate events. We want to know how much energy we can save, how to reduce the environmental footprint, and also to consider how we can develop measures to protect the soil”.

He reflected that, “We need an environmentally-friendly agriculture sector that improves soil efficiency and restores soil health. Productivity can be increased by improving agriculture. Bridging that yield gap through better agriculture and better soil health will enable us to produce more with less”, he remarked.

The Director General of IICA, Manuel Otero, stated that “We must build up and join efforts, fostering inter-cooperation and developing forums for coordination and integration. That is the raison d’être of the “Living Soils of the Americas” joint initiative with Ohio State University.

From IICA’s point of view, the initiative will allow for renewing its commitment to a soil-centered health approach, to ensure that the agriculture sector will continue to be the foundation for food and nutritional security in the Americas and the world in the future.

Rattan Lal is considered the world’s leading authority on soil science. A prominent university professor in this field, he is the author of 22 books and hundreds of articles published in scientific reference journals. Thomson Reuters included Lal in its list of The World’s Most Influential Scientific Minds (2014-2016).

As a member of the Intergovernmental Panel on Climate Change, Dr. Lal was a co-laureate of the 2007 Nobel Peace Prize. In 2020, he received the World Food Prize and was designated an IICA Goodwill Ambassador.

The Carbon Management and Sequestration Center (CMASC) at Ohio State University is one of the world’s leading research centers, providing comprehensive, interdisciplinary research on terrestrial carbon management and sequestration techniques and technologies in agriculture and related fields.

The status of soils in Latin America and the Caribbean

It is estimated that 49% of the Latin American and Caribbean territory is exposed to water erosion, and approximately 56% of land is affected by chemical degradation of soils.

Soil degradation, which is rapidly advancing, is threatening the capacity of Latin America and the Caribbean to meet present and projected food demand in a sustainable manner, with all that this implies.

The reduced capacity of soils to provide ecosystem services, which regulate global carbon, water and nutrient cycles, also generates significant economic losses and limits the quantity and quality of natural resources available to support socio-economic activities and the livelihoods of populations.

Main Photo: Ohio State University Professor and winner of the 2020 World Food Prize, Rattan Lal, is partnering with the Inter-American Institute for Cooperation on Agriculture (IICA) in an initiative that will bring together science, governments and fieldwork to restore soil health. The date of the agreement was chosen in commemoration of World Soil Day, which is celebrated on December 5.