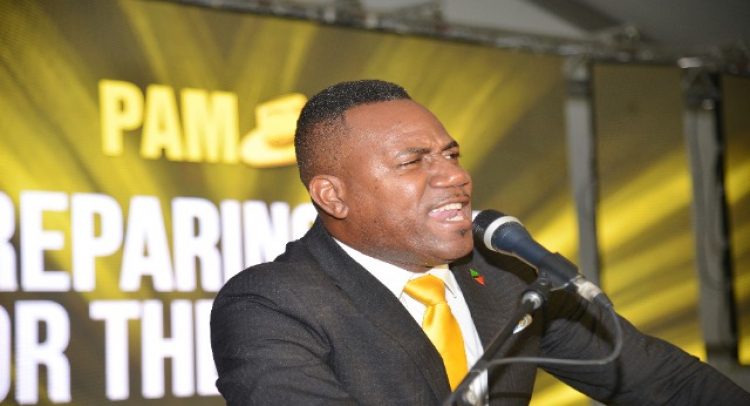 Speaking just hours after being ratified for the position on Sunday, 11th April,2021, for another term, Richards said he will be working to broaden PAM’s horizons.

“Our Party will sharpen its symbols of identity and modernize its internal structures and functionalities. And if you paid close attention to today’s convention and the weeks leading up to now, you must have noticed and felt a great difference,” said Richards.

In the life of any organization, including political parties, it is imperative to make changes to ensure that you remain relevant and effective, stated the leader.

He declared, “What I am trying to tell you, is that the time for self reflection has come for PAM.”

Even the greatest athletes and teams understand that if they are to remain at the top of their game, they have to continue evolving and finding new ways of repeating success, stated Richards.

Similar sentiments were shared by the convention’s Featured Speaker, and former leader of PAM, Dr. Sir Kennedy Simmonds, who was the first prime minister of St. Kitts and Nevis and now a National Hero.

Simmonds told the delegates that when he examined the theme being used for the convention, “Preparing Now for the Future”, it must mean that  “We should expect a new attitude and a new focus from the party. It should restructure. It must reorganize.”

He cautioned them that it must start from the Executive level, over to the constituency branches and filtering into the grassroots of the supporters.

Recognizing some of the challenges faced by the Party, Simmonds explained that preparing for the future also has to  mean “that we should adopt a new and positive attitude about who we are as PAM. And we should be proud of our identity.”

This seemed to have resonated with Richards, who echored the sentiments by stating that “When we say PAM, we must always think Yellow or Gold, our colours of identity. When we think of PAM, we must be proud of our history and achievements.

And when the name of PAM is called, we must remember that we are Brothers & Sisters and Members & Friends.”

Richards too was encouraging to the delegates, telling them “By all means, like Sir Kennedy has intimated, let no one discourage you from being PAM. You should all feel proud of being a member of the Largest, Strongest and Fearless Party.”

In addition to Richards as Political Leader, his two Deputies, Lindsay Grant and Eugene Hamilton as well as Party Chairman, Jonel Powell, were returned for another term on the executive.

For the first time, the convention was hosted in Sandy Point at the new Play Field, but the Caucus where the elections were held, was held at their Party headquarters in Basseterre, on Sunday morning.

Officials from the Department of Consumer Affairs are special guests on Working For You on Wednesday, April 14