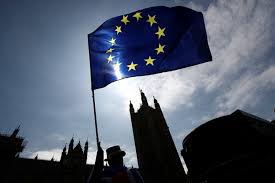 A parliamentary vote on the shape of Britain’s relationship with Europe next week is likely to force rebels in Theresa May’s government into the open, threatening instability and adding yet another twist to the tortured effort to reach a Brexit deal.

MPs are due to vote on June 12 and 13 on amendments to the EU withdrawal bill, which lays out the legal foundation for the biggest transformation in Britain in decades.

The outcome is far from certain. Nearly two years after Britons voted in a referendum to leave the European Union, Prime Minister May’s weak minority government has not only failed to agree the terms of separation, it has also yet to win a concensus within her own party.

European diplomats are increasingly worried that Britain may end up “crashing out” of the bloc without a deal on Brexit Day on March 29, 2019.

“This bill isn’t just really about what’s in the bill itself, it is both sides setting the scene for their vision of Brexit. This is the first big, big legislative moment in that debate,” said Catherine Haddon, resident historian at the Institute for Government think tank.

One of the most closely watched votes will be on customs arrangements to determine how freely 560 billion pounds worth of goods will move across borders between the world’s fifth largest economy and its biggest trading bloc.

Businesses ranging from small goods traders to multinationals with complex cross-border ties agree that leaving the customs union could fracture intricate supply chains built up over the last 40 years.

Both the Conservatives and the two houses of parliament are divided on the issue, pitting those who believe pragmatism and business continuity are paramount against others who see it as part of an ideological battle about sovereignty.

The focus is also on access to the single market, which ensures services, capital, workers and goods can flow freely within the bloc without being subject to such barriers as visas and tariffs.

“This will define the country’s future for the next decade, maybe the next 25 years. This is the most important thing that any of us will do in parliament,” said Stephen Hammond, a ruling party politician who wants to keep close ties with the EU.

The House of Commons passed May’s withdrawal bill in January largely unchanged. The 15 amendments now under consideration were agreed in the largely un-elected, pro-EU House of Lords, where the Conservatives hold less than a third of the seats.

If party rebels can muster enough support for the upper house’s amendments, they could set in motion renewed calls for May to step down as party leader from hard-core Brexiteer supporters.

Both May and those supporters want Britain out of both the single market and the customs union.

May says the principle of freedom of movement for workers is incompatible with the will of the British people as expressed in the referendum to limit migration. The customs union would stop Britain negotiating its own free trade deals, she says, a sovereignty issue.

Instead, she wants to sign a comprehensive free trade agreement with the EU and negotiate an experimental and as yet relatively undefined customs arrangement to facilitate as frictionless trade as possible.

Some in the party say that while the single market remains off limits, withdrawing from the customs union is an unnecessary risk. They advocate a backstop policy to keep Britain in a permanent customs arrangement if there is no deal.

With the support of the opposition Labour Party, they believe they have enough votes to force the issue

May’s government currently has a working majority of 14 among the 639 active members of parliament. Assuming the three most eurosceptic Labour politicians vote with the Conservatives, this means the government could lose a vote if more than 11 of their members vote against it.

At least 14 Conservative members have taken public positions that they want to stay in the customs union. Some politicians have told Reuters they believe the number is even higher.

“We have the numbers, we are in a position of strength, and government knows it,” one Conservative MP told Reuters. The lawmaker said they would vote to stay in the customs union but asked not to be named so that he could speak freely.

IMF agrees to loan up to $50bn for Argentina