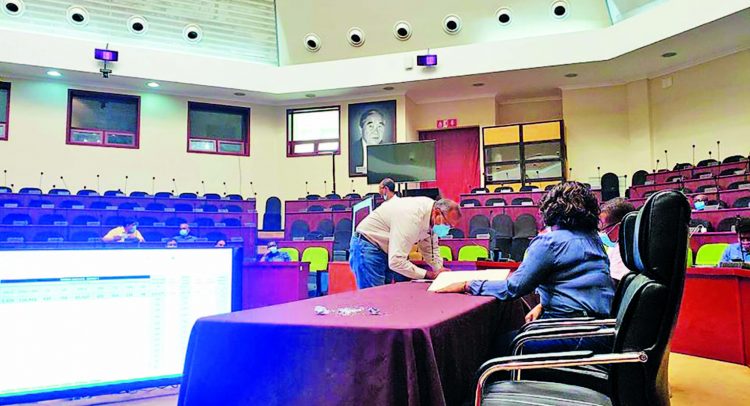 The Region Four (Demerara-Mahaica) results that gave the People’s Progressive Party/Civic a total victory margin of more than 15,400 votes over their nearest rivals, A Partnership for National Unity/Alliance For Change (APNU/AFC) has officially been certified.

The certification of the results was done at the Arthur Chung Conference Centre (ACCC) just after 15:00h on Tuesday. According to the certified General Elections results, PPP gained 80,920 votes in Region Four while APNU/AFC received 116,941 votes.

Back in March, controversial Region Four Returning Officer, Clairmont Mingo had fraudulently declared 136,057 votes for APNU/AFC and 77,231 votes for PPP/C.

On Tuesday, signing off on the General and Regional results certificate was representative of the main opposition PPP, Dr Frank Anthony.

Ever since the certification of Region One (Barima-Waini), APNU/AFC has, in fact, refused to sign off on any certifications, even for regions they won.

APNU/AFC has raised objections to the fact that the certificates of district tabulation contain the words “valid votes”, due to their contention that there was electoral fraud. However, several of their allegations, of dead and migrated electors having voted on election day, have already been disproved.

According to the recount order, Chief Elections Officer (CEO) Keith Lowenfield must now tabulate the matrices for the recount in all 10 regions, prepare and submit a report based on those tabulations by June 13, together “with a summary of the observation reports of each district, to the Commission.”

The report has to then be deliberated on by the Commission, a final report pursuant to Section 96 of the Representation of the People Act has to be submitted and a declaration made within three days.

Those observation reports are, in fact, inundated with unsubstantiated claims made by APNU/AFC agents during the recount. These included that persons migrated or are dead but still voted. A number of these allegations have been disputed by persons who have come forward to prove that they were in fact in Guyana and voted in person on Election Day.

In one case, APNU/AFC agents objected to the serial number of prominent Attorney-at-Law Devindra Kissoon and this objection was noted in the observation report. However, not only was it established that Kissoon was in Guyana on Election Day, but he also served as an accredited elections observer for the American Chamber of Commerce (AmCham Guyana).

Road to recount
On March 2, the original counting of the ballots cast had proceeded smoothly and had been completed in nine (9) regions with the PPP/C in a commanding lead. But the tabulation of Statements of Poll (SoPs) was interrupted in District Four (Demerara-Mahaica) after Returning Officer Clairmont Mingo switched from the legal procedure – which ensures transparency – whereby each SOP had to be exhibited to the stakeholders present to enable comparison to their copies.

However, Mingo diverted to a procedure where the purported numbers from the SoPs were incorporated into a consolidated spreadsheet. This led to immediate calls for transparency from both local and international observers.

This led to the High Court case, when all the parties excepting APNU/AFC protested the sleight of hand that facilitated an inflation of the votes for that party.

Following the High Court’s decision, Mingo was ordered to revert to the prescribed procedure but he repeated his subterfuge in another guise and submitted totals that varied substantially from those of other parties and had the APNU/AFC ahead rather than the PPP/C.

The Chairwoman of GECOM, Retired Justice Claudette Singh agreed to a recount of the votes, which had been proposed by caretaker President David Granger and agreed to by Opposition Leader Bharrat Jagdeo after an intervention by several Caricom leaders. Since then both leaders have recommitted to accepting the results of the recount.

The elections recount was witnessed by representatives of all the nine political parties that contested the elections, observers from the Caribbean Community (Caricom), the Organisation of American States (OAS) and local observers including the Private Sector Commission and American Chamber of Commerce (AmCham).

As the recount process wound down, voices from the domestic and international community – local church leaders, the Private Sector Commission, the US State Department, Ambassadors of the US, EU, UK, Caricom, OAS have been calling for an acceptance of the recount by all the parties, leading to a peaceful transition for the new Government that has been chosen by the people of Guyana.

Buju back on Billboard