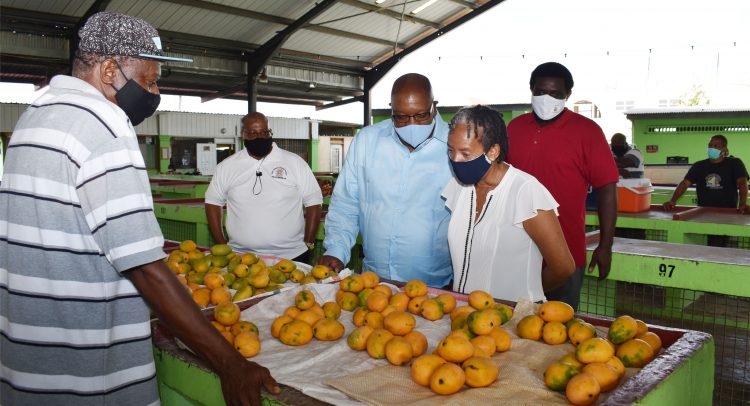 Relocation to the public market is for the safety of vendors and their customers, says PM Harris

BASSETERRE, ST. KITTS, June 16, 2021 (MMS-SKN) — Prime Minister, Dr the Hon Timothy Harris, is expressing satisfaction that the exercise to relocate street vendors to the Basseterre Public Market has taken off well and he is commending Ministry and Department of Agriculture’s team effort in ensuring that the vendors are operating from a safe location.

Prime Minister Harris spent about one and half hours on Wednesday June 16 morning on a fact finding mission at the Basseterre Public Market that had been organised by Permanent Secretary in the Ministry of Agriculture, Mr Ron Dublin-Collin. Also present were the Director of Agriculture Dr Tracy Challenger-Walters, Manager of the Basseterre Public Market Abattoir Mr Joseph Berry, and Market Keeper Mr Andre Flaherty.

After having visited the market on Monday, which was the first working day after Government had instituted the enhanced measures that included a partial lockdown, Dr Harris saw how persons were being organised. He thought he would come back on another occasion when the market would be fully open for him to have a greater sense of the layout of those who had come from off the streets to come inside the market to participate again in economic life.

“I am happy that Mr Ron Collins had been able to organise this because today I had the opportunity to interact with a large number of them here, and to hear their prospective,” said the Prime Minister. He added that his role was to explain to them the rationale for keeping them in the public market where they are safer and where their customers are safer in the context of the community spread that is being experienced.

He further noted that at the public market there were control measures where persons entering have their hands sanitised, have to wear their masks, their temperature is taken and have to provide their names and addresses which he pointed out that they were all critical elements of the new environment in which people are operating.

“The obligation to record one’s name allow us to be able to find people if needs be if any who had been here would come down with the virus within a particular period of time,” pointed out the Honourable Prime Minister. “We are able to round up as many people and to quarantine them where necessary; isolate them where necessary so that you cut off the ability of the virus to spread because if any persons would have it, unaware of it, they keep on spreading it on to others.”

Prime Minister Harris, who not only listened to the concerns by the vendors but also patronised their businesses, said the exercise was good and that he was impressed by the organisation at the market. Things were going smoothly, even though it was on a mid-week day when traffic is less in the market.

Traditionally, he noted, it is Fridays and Saturdays that are the best days for commercial activity in the market, and promised to return on a Saturday to see what it will be like in the new dispensation.

The bathrooms at the market have been refurbished and there are a number of signage that have been put up to remind persons to wear their masks, and are located at strategic positions in the market and also at the entry of the eatery located in the market. The Prime Minister commended the team effort of the Ministry and Department of Agriculture which allow people to know that in the new environment they are adapting to the necessities of the National Covid-19 Task Force.

In the meantime, Permanent Secretary in the Ministry of Agriculture Mr Ron Dublin-Collins said that from the Ministry end, they are going to give every support to the vendors to make them as comfortable as possible in the market. He observed that the areas of concern that have been raised by the vendors, the Ministry has begun to address them to ensure that they can accommodate as many persons as possible and to help them in the promotion of their sales in the market.

“We want to assure persons that we are doing everything to accommodate them and that we are following all the protocols – the non-pharmaceutical procedures – to ensure their safety,” said Mr Dublin-Collins. “So far the implementation of the process is smooth and not as problematic as we would have thought and we are grateful for the cooperation in a large measure.”

Featured Image – Prime Minister Harris (centre) and Director of Agriculture Dr Tracy Challenger-Walters (right) and PS Ron Dublin-Collins (left) talking to a vendor who was selling mangoes. Behind them is Mr Andre Flaherty.

The unvaccinated still pose a considerable risk to the rest of the Federation - CMO Dr. Hazel Laws