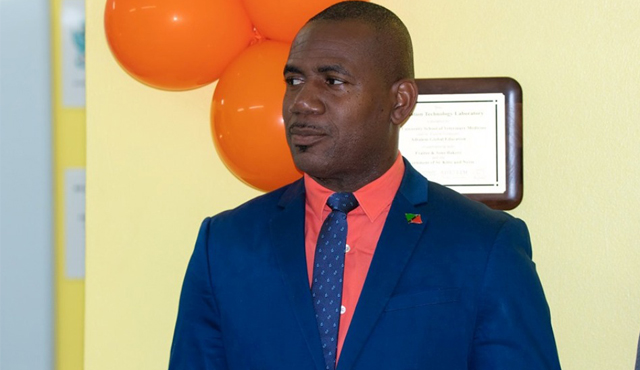 Remarks By Hon. Shawn Richards, The Opening Ceremony of the Sir Kennedy Exhibition at the National Trust 22nd July, 2020

Good morning. I stand here humbled by the task that is given to me to bring remarks at the opening ceremony for this special exhibition in honour of Sir Kennedy Alphonse Simmonds, our only living national hero. And I dear say, hero he is.

At every occasion where I am called upon to bring remarks for an event involving Sir Kennedy I am not only humbled but also inspired to be walking in the footprints of such a remarkable gentleman and leader.

As the current leader of the People’s Action Movement (P.A.M), the party that Sir Kennedy co-founded, I continue to be impressed by his grandeur legacy that has, unfortunately, been obscured by the work of small men.

It is therefore very heartening for me to be present for an exhibition that will feature six key aspects of Sir Kennedy’s life through artefacts, audio and visual representation, and other print information.

I am confident that this exhibition that will display Sir Kennedy’s life under six (6) sections will accentuate aspects of the simple yet powerfully motivating life of Sir Kennedy. I commend the St. Christopher National Trust for this undertaking which seeks to “enlighten, educate, engage and delight the public with the information that will be displayed, [and to] raise awareness of the impact Sir Kennedy had on the transformation of the economy”.

I therefore ask you to join me in applauding this valiant undertaking of the St. Christopher National Trust to protect, preserve and promote our history and heritage in this exhibition. Considering the history and legacy of Sir Kennedy, I could only imagine the challenge that the organisers of this exhibition would have had in reviewing the extensive life of Sir Kennedy and subsequently deciding what to include.

Sir Kennedy’s life story is an inspiration to me and can be the same for all young people, especially those of our beloved Federation.

His life, in my mind, is a powerful testimony that it does not matter if your life’s journey starts in poverty on a small street with very limited resources.
His life’s journey is a continual reminder that it is not the limit of your physical resources that determine what you become when you have ambition, discipline and dedication.

As a matter of fact, Sir Kennedy’s life story reverberates the potent lesson that your starting point is not your destiny! His life reminds me, and actually reminds us, that from our current situations we can advance to great things with the right aptitude and attitude.

It is for this reason that I (though I am not the current Minister of Education, Youth and Culture) am urging all parents, teachers, and students to make some time to come to this exhibition. It will be a tremendously enlightening and rewarding experience.

Our people really need to visit this exhibition to see/learn how Sir Kennedy’s life was not a life of committed to himself, but a life of service committed to the empowerment of the people. His life’s story reflects some powerful life themes that are foundational to happy and meaningful living and working.

His life epitomizes selflessness, forgiveness, resilience and commitment to purpose. These are pillars of our nation’s development throughout the years and these themes must continue to be featured in the decisions, actions, and practices of our people and government. Service to the people was such a cross-cutting theme of Sir Kennedy’s life and legacy that it undergirded every decision that he made.

How many of you are aware that Sir Kennedy was the first representative in St. Kitts and Nevis to open a constituency office and allocate time weekly for engaging with the people? It is therefore not surprising that Chapter 68 in his book, “The Making of a National Hero” is captioned, “Making People’s Lives Better”. Such is the nature of the man – such is the calibre of our only living national hero.

Sir Kennedy was wholeheartedly committed to the enhancement of life and work for all the people and residents of St. Kitts and Nevis. It was under his leadership that many of our current national programmes commenced.

Consider some of the initiatives:

 The Port Zante development
 The building of the College of Further Education ( now called the Clarence Fitzroy Bryant College)
 The building of the several primary schools, including the Sandy Point Primary School School, the new Dieppe Bay Primary School, the Verchilds Primary School (now called the Tyrrell Williams Primary School)
 The building of the new Court House now the Sir Lee Llewellyn Moore Judicial Complex
 The commissioning of the School Meals Feeding Programme
 The commissioning of the Student Educational Learning Fund (S.E.L.F) which provides text books to students as well the payment of examination fees for school aged students
 The improvement of air services and lighting in and out of Nevis and St. Kitts
 The completion of the Deep Water Port
 The South East Peninsula Project (now the Dr. Kennedy Simmonds highway)
 The improvement of ferry service between St. Kitts and Nevis
 Our Citizenship by investment programme – the oldest and highly respected programme in the region

There is certainly much more to know and learn about Sir Kennedy and this exhibition will provide a greater glimpse into his life. His autobiography, The making of a National Hero” is also a riveting account of many elements of his life and service.

And at this juncture, permit to add that if you have not yet purchased that book, you need to do so and read it.

Ladies and gentlemen, you have no idea how excited I am by the hosting of this national exhibition that puts the spotlight on one of our nation’s most magnanimous leaders.

He is a gentleman whose contributions to national development have not received deserving national recognition because of the petty, selfish and uncivil attempts by some immature political figures who tried to obliterate over 15 years of national development, the period 1980 to 1995, when Sir Kennedy marshalled our small nation to positions of regional and international acclaim.

It was not by chance that our nation was adjudged the world’s freest and safest nation more than once during the period of Sir Kennedy’s leadership of the Federation of St. Kitts and Nevis.

It really disturbs me that for almost two decades (1995 to 2015) there was a deliberate agenda to deny and discredit the contributions of our nation’s first Prime Minister – the man on whose shoulders the modern St. Kitts and Nevis continues to be built! How unpatriotic can people be to try to hide and erase from our nation’s records the sterling contribution of the humble yet powerful, quiet yet dynamic, unassuming yet purposefully and diligently potent leader of this beloved Federation?

Nonetheless, Sir Kennedy’s light could not be kept hidden despite the best efforts.

In closing, let me again extend heartiest commendations to the St. Christopher National Trust for this very relevant national exercise. I hope that all patrons will truly appreciate the national treasures that are captured in the work of the National Trust.

TikTok could be sold to American investors to avert US ban, reports say