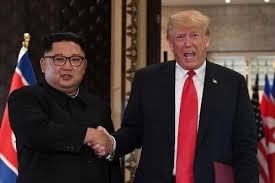 Reports that North Korea intends to secretly maintain some of its nuclear stockpile and production facilities raised questions yesterday about President Donald Trump’s insistence that the North was “no longer a nuclear threat,” after his historic summit in Singapore.

The Washington Post cited four unnamed US officials who, it said, had seen or been briefed on new intelligence findings that point to preparations for deceiving the United States.

The reports followed Trump’s boast that the summit denuclearisation pledge made by North Korean leader Kim Jong Un had effectively ended the North’s nuclear threat, after months of inflammatory language from both sides.

The Post said the evidence of North Korean cheating had emerged since the June 12 summit, where Kim and Trump signed a pledge “to work towards complete denuclearisation of the Korean Peninsula.”

The stock phrase failed to clearly define denuclearisation or produce a specific timeline towards dismantling the North’s atomic weapons arsenal.

It also stopped short of long-standing US demands for North Korea to give up its atomic arsenal in a “verifiable” and “irreversible” way.

Yesterday, Trump stuck by his confidence in the North’s efforts.

“I think they’re very serious about it,” Trump said during an interview on Fox News’ Sunday Morning Futures.

Asked how he could trust Kim’s vow to denuclearise, Trump replied: “We had great chemistry. I made a deal with him. I shook hands with him. I really believe he means it.”

The interview was broadcast yesterday, but taped late in the week, before the reports of North Korean cheating emerged publicly.

“We gave nothing. What we are going to give is good things in the future,” the president said.

His National Security Advisor, John Bolton, insisted yesterday that the administration was fully aware of North Korea’s history of deception and was not entering the denuclearisation talks naively.

“There’s not any starry-eyed feeling among the group doing this,” Bolton said on CBS’s Face the Nation.

Separately, he told Fox News Sunday that “we are using the full range of our capabilities to understand what North Korea is doing.”

NBC News quoted intelligence officials as saying Pyongyang has in fact been increasing fuel production for nuclear weapons at several hidden sites. It said the North was working to “extract every concession” from the White House rather than give up an atomic arsenal it has spent years developing.

“There’s no evidence that they are decreasing stockpiles, or that they have stopped their production,” NBC quoted one US official as saying.

While Pyongyang has suspended its missile and nuclear tests, the official said, “There is absolutely unequivocal evidence that they are trying to deceive the US.”

The only uranium enrichment spot North Korea has acknowledged publicly is in Yongbyon, north of Pyongyang, but reports of secret facilities have surfaced.

Last week, the respected 38 North website said recent satellite imagery showed that not only were operations continuing at Yongbyon, the North was also carrying out infrastructure works.

US officials have been vague or dismissive when asked whether Pyongyang has provided a full and detailed accounting of its nuclear programme and arsenal — a requirement if monitors are to reliably monitor its destruction.

US Secretary of State Mike Pompeo has said he plans to meet with Kim to “flesh out” details of the disarmament promise, but has insisted North Korea is serious.

“There’s a lot of work between here and there. My team is already doing it. I’ll likely travel back before too terribly long,” the top US diplomat said in June.