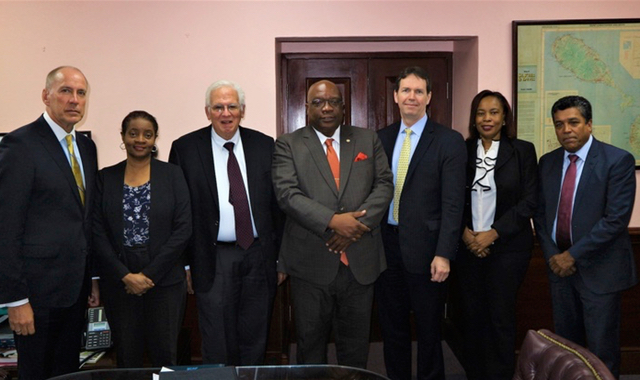 Basseterre, St. Kitts, 10th January, 2019 (MyVueNews.com) – The Government was assured on 9th January, 2019, that the purchase of Scotiabank by Republic Financial Holdings Limited (RFHL) will not result in the loss of jobs at the local Scotiabank operations.

The occasion was a meeting between senior representatives of the Republic Financial Holdings Limited and St. Kitts and Nevis’ Prime Minister Dr. Timothy Harris.

RFHL announced in November 2018 that it had entered into an agreement to acquire Scotiabank’s banking operations in Guyana, St. Maarten and the Eastern Caribbean territories of Anguilla, Antigua and Barbuda, Dominica, Grenada, St. Kitts and Nevis, St. Lucia, and St. Vincent and the Grenadines.

De Souza told the Prime Minister, “Not one single staff member of Scotiabank will be displaced. They will not be affected in any form or fashion.  Their remuneration will remain whole.”

Supporting that view was Brendan King, the Senior Vice President of International Banking at Scotiabank.

King stated, “It was very important to us that our customers and employees be handled with care.” According to King, Scotiabank and Republic Financial Holdings Limited (RFHL) “share the same core values.” He said there will be no disruption of any kind.

In further support for the Scotiabank purchase, RFHL Chairman Ronald Harford said, “It is very necessary to protect our reputation.  We will practice those high standards that Scotiabank has practiced.”

He also indicated that the company had correspondent banking relationships with an extensive range of major international banks in Canada, the United States, the United Kingdom and Europe, and elsewhere.

The Republic Group has served the Caribbean for 181 years, having opened its first office in Port of Spain, Trinidad, with the establishment of Colonial Bank in 1837.  It has branches in Grenada and St. Lucia.

The company reported it financed over US$268 million in support of significant nation-building projects across the Caribbean since 2001 – this sum includes US$7.4 million for the Carifesta Housing Development in St. Kitts in the year 2005.

Harford said the acquisition would create “a strong regional champion” with US$15 billion in assets, up from US$10.5 billion.  Profits, he said, would also increase, post-acquisition, from US$198 million to US$270 million.

Trump walks out of shutdown talks with a ‘bye-bye'