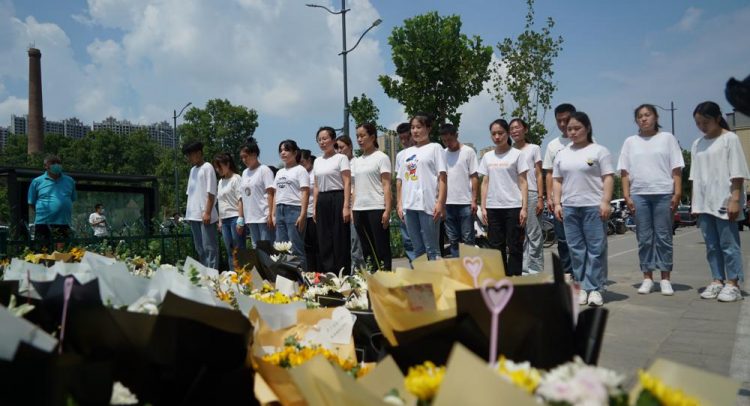 ZHENGZHOU, China (AP) — Residents on Tuesday laid bouquet after bouquet, the neatly tied yellow and white flowers standing on end, outside an entrance to a subway station in central China where 14 people died last week after a record-breaking downpour flooded large swaths of Henan province.

Torrents of water rushed into a subway line in the provincial capital, Zhengzhou, trapping a train with hundreds of passengers between two stations. The deluge drowned some and left others gasping for breath in chest-high water until emergency crews could reach them.

“I’m filled with grief,” said Zhengzhou resident Zhang Shuai, 35, who bowed three times in front of the entrance after laying a bouquet of chrysanthemums. “I hope that their relatives can recover from this tragedy as soon as possible.”

At least 71 people perished in the floods, according to an updated death toll Tuesday. Zhengzhou authorities said 14 had died in the subway station, up from 12 reported earlier.

A crowd of about 50 people stood outside under a partly cloudy sky as streams of mourners and delivery drivers left bouquets wrapped in black paper in a rectangular area extending from the shuttered station entrance. Some tucked in notes, with one reading: “I hope there are no floods in heaven. Rest in peace.”

Questions have swirled about the design and safety of the Zhengzhou subway line 5, which opened just two years ago. Some relatives of those who died have criticized the Zhengzhou subway authority, accusing it of continuing to operate the trains even when it became clear it would be dangerous to do so. They said subway officials had obstructed the search for missing relatives.

“I no longer have a husband; my daughter no longer has a father,” the wife of Sha Tao, a Zhengzhou resident who drowned in the subway, wrote on Weibo, a Chinese social media platform. “If they had prepared contingency plans ahead of time, the number of deaths could have been minimized. The Zhengzhou subway must take the blame and responsibility!”

On Monday, photos on social media showed yellow plastic barricades set up around the bouquets, blocking them from view and prompting criticism. A video published by a local newspaper, Dahe Daily, showed the barricades being taken down later.

The barricades around one entrance were gone Tuesday, and journalists could take photos and conduct interviews. The procession proceeded peacefully.

Still, the atmosphere was tense at times. Uniformed and plainclothes police monitored the scene. AP journalists were asked to show identification but allowed to stay after being told to do “neutral” reporting.

At one point, a woman who came with a child sparred with plainclothes officers after she was told to hustle along.

“I’m not leaving! I don’t think driving people away is going to work!” she snapped.

The officers fell silent. The woman stood with the child, pointing to the messages tucked into the bouquets. She snapped a photo with her phone, took one last look, then walked away.