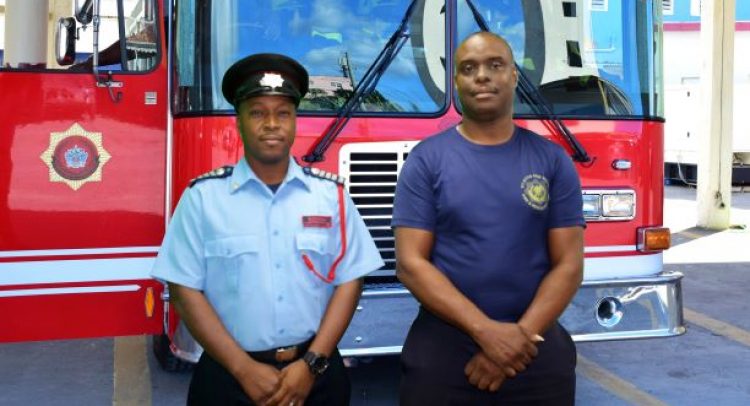 Responding to fires and other emergencies has improved over the years, say SKNFRS Officers

Basseterre, St. Kitts, May 14, 2021 (SKNIS): Officers within St. Kitts and Nevis Fire and Rescue Services (SKNFRS) said that responding to fires and other emergencies has improved over the years with the introduction of new and modern firefighting equipment.

“Our response time has improved over the years, still improving as we get the modern equipment, but there is still some factors that would affect our response, external factors, not anything much to do with internal like firefighting really,” said Rommel Williams, Fire Sub-Station Officer Level II from the SKNFRS on the May 12 edition of Working for You. “We are in a much better position than we were a few years ago because when we joined the organization, we had fire trucks that persons would say ‘boy I could walk and pass that truck what kind of truck is that?’ So, over the years, we would have acquired modern firefighting equipment so we can respond in better time.”

Mr. Williams said that numerous factors can either speed or slow a fire department’s response time such as the time of the day, the day of the week, the distance to be travelled, or whether or not there is an accident.

“These things would affect our time because if it’s let’s say between 3:30 to 4 o’clock or 5 o’clock when people are getting off from work, the more vehicles on the street you would have to be even more careful,” he said. “You still have to observe the traffic rules and stop when you are supposed to stop. And with these traffic lights now, you have to go through them even more slowly so you have to slow down which would now reduce the response time.”

Mr. Williams reiterated that the department’s ability to respond has significantly improved because of the “top of the line equipment.”

Timothy Martin, Fire Sub-Station Officer from the SKNFRS explained that when a call comes into the station the officers have three minutes – regardless of what they are doing – from the time of the call and the ringing of the bell to prepare themselves, “get out and get to that truck in order to move out.”

Mr. Martin appealed to the general public to always yield the right-of-way to all emergency vehicles using a siren and flashing lights. These include police, fire trucks, ambulances, or any other emergency vehicles.

“It is mandatory that they pull over to the far left as much as possible. Persons hear the siren, and they are still going about their journey. Whether the fire appliance is behind them or coming in the oncoming direction, both sides need to clear the way, and in them clearing the way would give us the opportunity to get to where we need to get to in a [timelier] manner,” said Mr. Martin. “It is not just for the fire appliance,  but we want to encourage it for all emergency vehicles whether police or the ambulance. The siren that you hear, or you see the flashing lights, just pull over to allow them to get to where they need to get to.”

He added that reducing the response time is extremely important as the public relies on first responders during emergencies. He further stated that the shorter the response time of emergency services the more lives are saved.