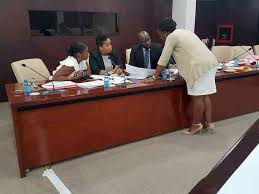 Review of ballots completed, results to be validated today

The results of the February 26 snap election can now be validated by the Voting Bureau. This will be done another public sitting in Parliament House starting at 9:30am today, Wednesday.

The preliminary election result has United Democrats at seven seats, National Alliance (NA) five seats, United St. Maarten Party (US Party) two seats and St. Maarten Christian Party (SCMP) one seat. The seat quota is 904 votes. This will change based on the number of invalid ballots rendered valid in the recheck by the Voting Bureau. Whether, the quota change is significant enough to change the election results will be known today.

Following the validation of the results, the 15 Members of Parliament-elect will each receive a letter from Voting Bureau Chairman Jason Rogers officially informing them of their election.

Rogers, by law, has to send the letters within three days of the validation of the results. Each MP-elect must acknowledge receipt of the letter within five days of the letter’s date. Then, each must respond within 10 days of the date of Rogers’ letter whether he or she will take up his/her seat in the legislature. Any MP-elect who fails to respond within the legally prescribed time will lose his/her seats and the next highest vote-getter on that party’s slate will be in line for the seat.

The Voting Bureau decided ex officio on Monday to do a total recount of three of the 20 polling stations and partial recounts of five others. A partial recount was also carried out for Polling Station #11 – Charles Leopold Bell School – as it was observed that the tally sheet for United Democrats did not match the “proces verbaal” – the report of the polling station’s chairperson. The recount established that the proces verbal count was correct.

The addition of Polling Station #11 to the partial recount came after the locked ballot box was open at the public sitting to locate the tally sheets for each party. The tally sheets are an important part of the ballot verification process.

The tally sheets were also missing for Polling Stations #12 – Leonard Connor Primary School, #17 – Dutch Quarter Community Helpdesk, and #13 – Simpson Bay Community Centre. The sheets for the first two were quickly located when the boxes were opened. This was not the case for #13 – Simpson Bay Community Centre; the tally sheets had been placed in the sealed envelopes of each of the six parties in the race.

Total recounts were conducted for three polling stations: #10 National Institute for Professional Advancement (NIPA), #15 Melford Hazel Sports and Recreational Centre and #18 the Seventh-Day Adventist School in Cole Bay. The partial recounts could not proceed on Monday afternoon due to a power outage that affected the Dutch side’s capital of Philipsburg. This caused the meeting to continue on Tuesday.

Partial recount of polling station #5 Dutch Quarter Community Centre focused only on the ballots cast for United St. Maarten Party (US Party). The review was prompted after the Central Voting Bureau noticed a difference between the tally sheet and the “proces verbaal” of the station chairperson. The tally sheet had two “sticks,” meaning two votes, for candidate number three former Minister Maria Buncamper-Molanus while the proces verbaal recorded the numeral “11.”

The recount of polling station #5 verified that Buncamper-Molanus had received 11 votes as recorded in the proces verbaal. The tally sheet was therefore incorrect, as it should have shown two bundles of “sticks” and a single one.

The review of all the invalid ballots from #5 saw the Voting Bureau rule 14 of those valid. United Democrats received six additional votes, NA three, St. Maarten Development Movement (SDM) four and US Party one.

Three “void” ballots were recorded for this district. Void ballots occur when a voter makes a mistake on a ballot and requests a new one from the polling station staff. The original ballot is stamped “void” and a new one is issued to the voter.

The ballots cast for United Democrats at polling station #7 Rupert I. Maynard Youth Community Centre were reviewed due again to a tally sheet/process verbaal error related to candidate Rhoda Arrindell. The tally sheet recorded 17 votes for her, but the proces verbaal only noted seven. The latter was found to be correct after the recount.

One vote was taken away from United Democrats candidate Angelique Romou after a ballot for her was deemed invalid – while colouring the circle with the red pencil the voter scratched into the white circle of the candidate below. Party representative voter Armand Meda objected, saying the now-invalid ballot could have been that of an elderly person or someone with a shaky hand and that the intent of the voter was clear. He called for a recheck of all parties to see if similar invalid ballots were in their stacks. Meda’s protest did not bear fruit.

Voting Bureau Chairman Jason Rogers said the law was clear about what an invalid ballot is and there was no reason to further doubt the count.

The NA slate was the focus of the partial recount of polling station #8 St. Maarten Academy. From the tally sheet and proces verbaal, it appeared that the numbers of votes for candidates Oswald Bell (number 20 on the slate) and Jelani Bell (21) had been switched. The recount found that the proces verbal was correct.

Eight of the 21 invalid ballots were made valid. Three each went to NA and United Democrats, and one each to People’s Progressive Alliance (PPA) and US Party.

The partial recount of polling station #14 Belvedere Community Centre related to a discrepancy between the tally sheet and proces verbal related to NA leader former Minister Silveria Jacobs. As with other polling stations, only ballots cast for that party were reviewed by the Voting Bureau. The recount deemed the proces verbaal correct.

Discrepancies similar to the other partial recount stations led to the recheck of the ballots for three of the six parties – United Democrats, SDM and US Party – cast at polling station #16 – Methodist Agogic Centre. The recount saw United Democrats lose three votes and US Party one vote.

The Voting Bureau had initially decided to only review ballots cast for the affected candidates in the five polling stations. However, after Monday’s total recount of the other polling stations, that decision was amended to count the entire stack of ballots for the parties, rather than the individual candidates. The amendment was prompted by not all ballots for a candidate being stacked together in the three total recount stations.

Rogers said at the start of the morning’s session that the amended decision had been taken for transparency and fairness.

Polling Station #1 John Larmonie Centre had the most invalid ballots deemed valid. The station had one of the highest counts of invalid ballots – 34. Of those, six were blank ballots. Fifteen of the remaining 28 were found to be valid ballots.

Ten of those now valid ballots were cast for United Democrats. They were for party leader Theo Heyliger (five) and one each for MPs Chanel Brownbill, Claret Connor and Sidharth “Cookie” Bijlani, Public Health Minister Emil Lee and soon-to-be MP Luc Mercelina.

Five of the valid ballots were for NA and went to former prime minister William Marlin (three) and one each for MP Ardwell Irion and Ludmilla Duncan.

All six parties in the race picked up additional votes when the invalid ballots were reviewed.

Commonwealth Games 2018: Omar McLeod 'did not make himself available'

Europeans, IMF tell Trump to step back from trade war