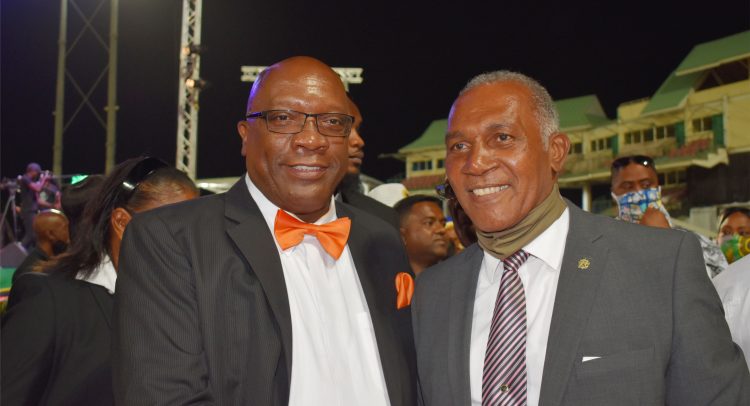 Prime Minister Dr the Hon Dr Timothy Harris says the two outgoing ministers who served in the first Team Unity Cabinet will have roles to play in the new Team Unity Government.

Mr Vance Amory who was Senior Minister and Minister of Nevis Affairs, Labour, Social Security, and Ecclesiastical Affairs, and a former Premier of Nevis, retired from active politics and did not seek re-election in the June 5 General Election. He was the member for Federal seat Nevis Ten.

Mr Ian Patches Liburd who was the Minister of Public Infrastructure, Posts, Urban Development, and Transport narrowly lost his bid to retain the St. Christopher One seat in the June 5 General Election, and has since sought redress through the court citing irregularities at the polls.

Prime Minister Harris made the announcement on Sunday evening June 14 as he introduced the new, and expanded, Team Unity Cabinet at a ceremony held at the Warner Park Cricket Stadium. He noted that the team brought new faces, with fresh ideas and energy to the government.

“Before I introduce the team, allow me from the bottom of my heart to say hearty thank you to Vance Amory who has served so excellently in the first Team Unity Cabinet,” said Dr Harris. He hoped that Mr Amory’s service would continue to be put to “good use to the people of the Federation in a new capacity in the second term Team Unity Government.”

The Nevis Ten seat was won by the Hon Eric Evelyn, who had earlier succeeded Mr Amory as the representative for the Gingerland seat in the Nevis Island Assembly elections held in December 2017. The Hon Evelyn has been named the new Federal Minister of Environment and Cooperatives.

“Equally I want to say thank you to my friend and former Cabinet colleague, Ian Patches Liburd, and to record the country’s indebtedness and gratitude for his exceptional best ever performance as a minister of Public Infrastructure in St. Kitts and Nevis,” said the Honourable Prime Minister.

Mr Liburd’s footprint, noted Dr Harris, can be seen everywhere, from the resurfacing of the Island Main Road, a brand new second cruise pier, the ferry terminal, to the east and west bus line terminals, and the list could go on and on.

“So we expect that in the second term Ian Patches Liburd shall continue to be of service to the people of St. Kitts and Nevis,” he said.