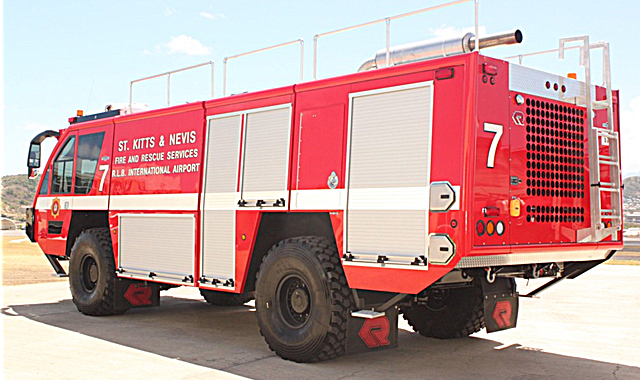 Basseterre, St. Kitts, 29th March, 2018 (MyVueNews.com) – The addition of a new fire and rescue vehicle at the Robert L. Bradshaw International Airport will enable the airport to handle more large aircraft once certified under the requirements of the International Civil Aviation Organisation (ICAO).

On Wednesday, 28th March, 2018, a 4×4 Rosenbauer Panther Appliance was commissioned for use exclusively at the airport.

Chief Fire Officer Everette O’Garro said the appliance is specially designed to meet the demands of the St. Kitts and Nevis Fire and Rescue Services (SKNFRS), and it is well equipped to “deal with any aircraft accident or incident occurring at or in the immediate vicinity of the airport”.

The number of fire tenders stationed exclusively at R.L.B. Airport is now four. As a result the airport’s rating by ICAO would increase from Category 8 to 9. A higher rating means that the requirements of larger aircraft can safely be met at an airport in the event of an emergency.

Costing over US$625,000, the new vehicle holds 1,500 gallons of water, and a storage capacity for 200 gallons of Aqueous Film-Forming Foam (AFFF) – which is specially-designed to extinguish hydrocarbon fuel fires.

It is also equipped with a dry chemical extinguishing agent system that holds up to 500 pounds. The chemical is designed to extinguish metal fires involving the undercarriage of aircraft.

Permanent Secretary in the Ministry of National Security, Osmond Petty, said that the SKNFRS is an important facet of the national security apparatus and government remains committed to upgrading the equipment and the capabilities of the men and women within the agency.

Training for SKNFRS fire fighters are being pursued at the Fire and Emergency Services Training Institute in Canada, as well as the South Carolina Fire Academy in the United States.

No thanks - Massiah to Lovell