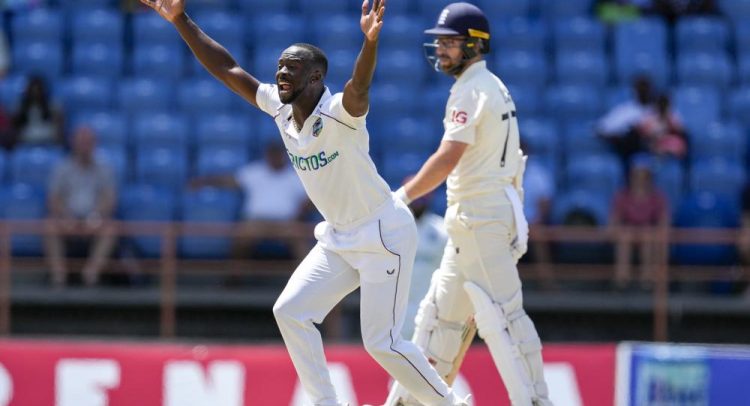 ST. JOHN’S, Antigua (AP) — Veteran fast bowler Kemar Roach is a late addition to the West Indies squad for the first cricket test against Bangladesh after overcoming a hamstring injury.

Cricket West Indies on Wednesday said Roach had made a full recovery from the injury sustained while playing for Surrey in the English county championship.

The 33-year-old Roach was added as a 13th player in the squad for the match at Sir Vivian Richards Stadium beginning Thursday. He is the West Indies’ leading wicket-taker in test matches with 242 wickets in 71 matches.

“It’s brilliant that he’s fit for the test match,” West Indies coach Phil Simmons said. “He’s always an inspiration for the younger players we have here and he’s ready to go. With 250 wickets around the corner, we’re happy with what he brings to the table, not just on the field but in the dressing room as well.”

FILE – West Indies’ Kemar Roach successfully appeals for the wicket of England’s Jack Leach during day four of their third Test cricket match at the National Cricket Stadium in St. George, Grenada on March 27, 2022. Roach is a late addition to the West Indies squad for the first cricket test against Bangladesh after overcoming a hamstring injury. (AP Photo/Ricardo Mazalan, File)