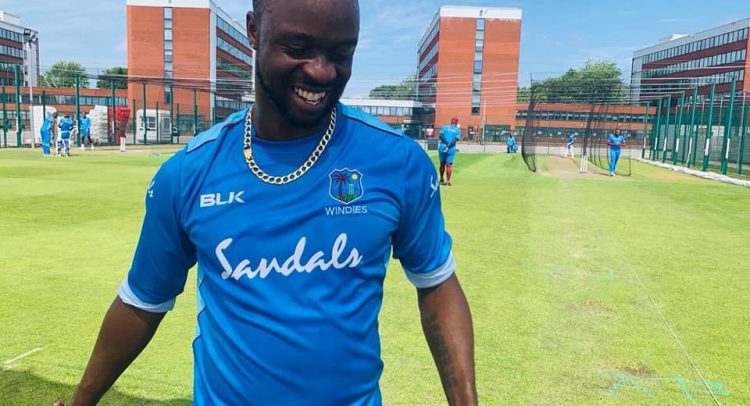 Fast bowler Kemar Roach says that West Indies fast bowling is in good hands seeing the youngsters who are on tour with him in England at the moment.

Roach, 31, has taken 19 wickets in England and enjoys bowling there: “England is a fast bowling paradise and I am.looing forward to bowling here. The pitches are good and I think that once we stick to our plan here the fast bowling attack can cause England problems. I don’t see why not.”

Roach was the strike bowler who got among England in the last series in the Caribbean in 2019. He grabbed 5/17 in the first Test in Barbados and after that spell England were bemused and went on to lose the series 2-0 handing the Wisden Trophy to the West Indies.

The other fast bowlers on tour with Roach are skipper Jason Holder, Shannon Gabriel who is recovering from injury, Oshane Thomas, the impressive Barbadian duo Chemar Holder and Keon Harding as well as Preston McSween. Roach assisted both Chemar and Harding during the West Indies Championship as they all played together for the champions Barbados Pride. Holder grabbed 35 wickets, while Harding took 29.

The Barbadian said that all is well within the camp and they are getting accustomed to the new protocols. “When we arrived it was a bit difficult having to wear mask and gloves everytime we went out but as the time has gone, things have gotten easier and we have become comfortable with all the protocols.”

Roach, a right-arm pacer reported a “pretty smooth” transition to the team’s quarantined training camp at Emirates Old Trafford but the ban on using saliva to shine the ball is taking some getting used to as the days and training go by. He pointed out that, “It’s pretty tough. We have had some sessions in the nets and the atmosphere is pretty chilly, so there’s not much sweat that you can produce. But we are coming up with some ways that we can probably get some gloss on the ball. It takes a lot more practice but we will keep working at it and see what the best way is.”

Meanwhile, the squad are still discussing ways to acknowledge the Black Lives Matter (BLM) movement when they play.

“I feel very strongly about it for obvious reasons,” Roach said. “But the team have discussed it in depth and we are going to go back and have a discussion about it again soon.

“Then as a team we will come up with a way to answer all questions relating to that Black Lives Matter issue.”

The first Test begins on July 8 in Southampton.