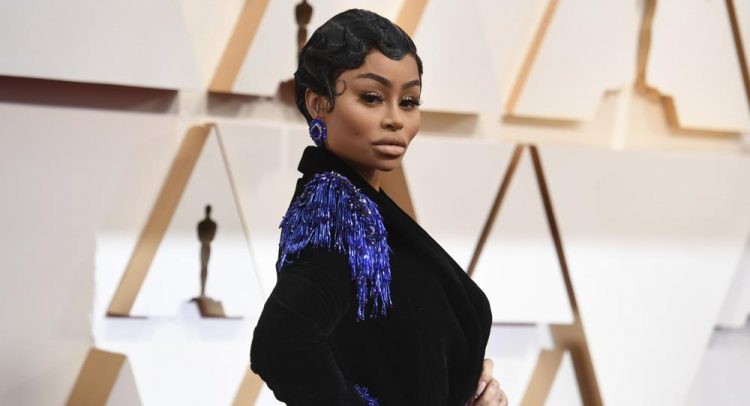 LOS ANGELES (AP) — Rob Kardashian testified Wednesday that he feared for his life on a night in 2016 when his then-fiancée Blac Chyna pointed a gun at his head, pulled a phone-charging cable around his neck and repeatedly hit him with a metal rod while under the influence of substances.

“She strangled me, she put a gun to my head twice, she was on cocaine and alcohol,” Kardashian said, his voice rising nearly to a shout in a Los Angeles courtroom as Chyna’s attorney Lynne Ciani sought to cast doubt on the attack and its severity.

Chyna is suing Rob Kardashian’s mother Kris Jenner and sisters Kim Kardashian, Khloe Kardashian and Kylie Jenner, alleging they spread false reports of her assaulting him in order to have her “Keeping Up With the Kardashians” spinoff “Rob & Chyna” canceled and ruin her reality TV career.

During an emotional and contentious hour on the stand, Rob Kardashian grew angry when Ciani asked him why photos and video from the days that followed didn’t show any marks on him, despite his testimony that she had hit him repeatedly with a 6-foot metal rod.

“Did you have as much as a Band-Aid on you?” the attorney asked.

Kris Jenner and Kim Kardashian watched the testimony from the front row of the gallery, and had no visible reaction.

Chyna testified earlier in the trial that she was never violent toward Rob Kardashian.

She said that on the night of Dec. 14 and the morning of Dec. 15, 2016, the couple had been celebrating the news that “Rob & Chyna” was getting a second season.

The all-night celebration turned into a bitter fight by morning, when he took her phone and shut himself in a closet, looking for evidence of communications with other men, she said.

She testified that earlier in the evening, she had wrapped a phone-charging cord around Rob Kardashian’s neck playfully because he was ignoring her, and picked up a gun he kept around, always unloaded, from a nightstand as a joke.

The chain of events would lead to the end of the relationship, and their show.

Rob Kardashian, 35, the youngest of Kris Jenner’s four children with the late Robert Kardashian, has kept a much lower public profile than his mother and sisters. He was mostly an offscreen character, and only occasionally appeared, on the family’s reality show.

He broke from the pattern in 2016, spending a year in the limelight before it went bad. He and Chyna began dating in January, announced their engagement in April, announced they were having a child together in May, had their own reality show premiere in September, and had a daughter, Dream, in November.

He testified Wednesday that he felt in retrospect that their love was never real, and that he had been at the “weakest, worst point” in his life when their relationship began.

He said the coupling was “toxic” from the start, and that she beat him at least five times during the yearlong relationship.

Rob Kardashian wore a loose-fitting, untucked black dress shirt on the stand. His otherwise dark testimony drew a laugh from most of the courtroom when Ciani suggested that two videos she showed were shot on the same day because he was wearing the same thing.

“That doesn’t mean anything,” he said. “I wear the same thing every day.”

Rob Kardashian is not a defendant in this trial. Chyna’s allegations against him, stemming from the same incidents, will get a separate trial when this one is done.

Earlier Wednesday, Corey Gamble, a key witness backing up Rob Kardashian’s account of the assault, insisted that he saw Chyna punch him and whip him with a phone-charging cord, as Ciani tried to poke holes in his story.

“I said that she attacked him,” testified Gamble, the longtime boyfriend and sometime co-star of “Keeping Up With the Kardashians” matriarch Kris Jenner. “What I saw is what I saw.”

Gamble said he rushed to the house the couple was staying in after Kris Jenner got an early morning call from her son, who sounded deeply distressed.

When he arrived, he said, Chyna was holding some sort of metal rod, and threw it down. She rushed toward Rob Kardashian, whipping the phone cord at him then punching him.

“By the time she got to him, she started hitting him,” Gamble testified. ”I was able to get in the middle of them two. I even got hit two or three times.”

Gamble said Chyna threw a chair at Rob Kardashian’s car as he was leaving, then attempted to pick up a table but Gamble stopped her.

During cross-examination, Ciani had Gamble read from a declaration he submitted in the case two years earlier, in which he said he arrived to find Chyna hitting Rob Kardashian with her fists, but made no mention of any of the objects.

“You didn’t see sufficient to mention the metal rod, the cord or the table?” Ciani asked.

“I don’t know why I didn’t include those details,” Gamble said.

FILE – Blac Chyna arrives at the Oscars on Sunday, Feb. 9, 2020, at the Dolby Theatre in Los Angeles. A jury has been seated and opening statements are set to begin Tuesday, April 19, 2022, in a trial that pits model and former reality television star Blac Chyna against the Kardashian family, who she alleges destroyed her TV career. (Photo by Richard Shotwell/Invision/AP, File)