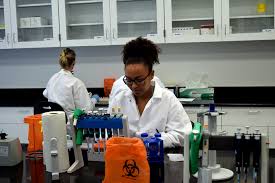 Ross University expands its footprint in St. Kitts and Nevis with the opening of its research and pathology building BASSETERRE, St. Kitts, July 11, 2018 (Press Unit in the Office of the Prime Minister) – On Tuesday, July 10, top level government officials in St. Kitts and Nevis joined representatives of Ross University School of Veterinary Medicine (RUSVM), as well as officials from its parent organization – Adtalem Global Education, for a ribbon cutting ceremony that signaled the official opening of the institution’s new multimillion-dollar Research and Pathology Building.

The ceremony was held under the auspices of the Governor General, His Excellency Sir S.W Tapley Seaton.

The US$10.5 million building features 13,000 square feet of research space and comprises a pathology viewing area to enhance student learning and allows for multidisciplinary research to benefit human and animal health in the Caribbean.

It is understood that the research in the new facility will allow for an improved understanding of zoonotic and vector-borne diseases and endangered species and ecosystems in the region.

Deputy Prime Minister and Minister of Education, the Honourable Shawn Richards, while delivering remarks, expressed his delight with the potential of the research that will be conducted right here in St. Kitts and Nevis.

“My Government is also happy that this new phase will result in enhanced understanding and control of zoonotic diseases that are transferred between animals and people, such as leptospirosis, and vector-borne diseases such as chikungunya, dengue fever and Zika. As you know, those three vector-borne diseases are spread by mosquito bites,” Minister Richards said. “My Government therefore envisages that the RUSVM Research and Pathology Building will serve to strengthen our ongoing partnership by becoming a national reference centre or important focal point for studying and controlling vector-borne viral and bacterial diseases.”

“In particular, the research and pathology building will revitalize animal agricultural research by strengthening best practices in monitoring and protecting our herd health, our public health system, and our food supply – from the farm to the dinner table,” Minister Richards stated, adding that Team Unity is therefore excited about opening of the new facility “because of the critical role that animal science research plays in food security.”

Deputy Prime Minister Richards disclosed that Ross University School of Veterinary Medicine and the Government of St. Kitts and Nevis, through the Department of Agriculture, already enjoy a longstanding relationship in respect to pathology services.

He added, “RUSVM performs autopsies on livestock animals that die at the Basseterre abattoir, and the university provides this service free of charge. This partnership allows students to obtain the educational exposure in a manner that is socially acceptable, while at the same time allowing the Agriculture Department to make informed, science-based decisions relating to animal health and food safety. Our strong history of collaborating with Ross University in the control, prevention, surveillance and treatment of disease is further cemented with this new research phase, not only in the area of food security.”

Dr. Smith is remembered as an accomplished large animal surgeon, veterinary historian, writer and speaker, and a champion of women in leadership.

Donald Trump 'fine' with UK protests ahead of visit

Final Round of Bids/Proposals for Sugar Mas 47