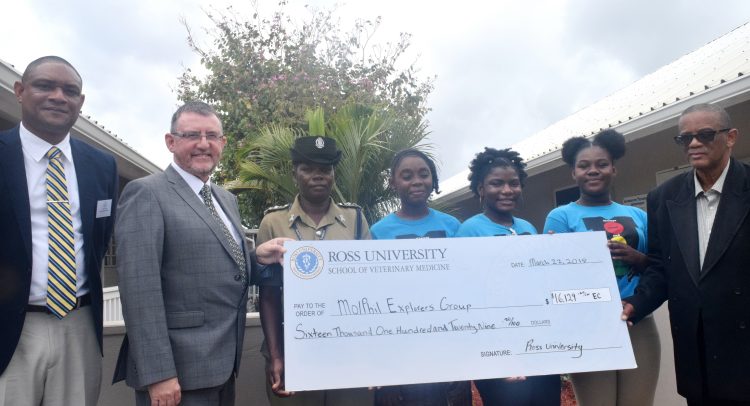 Basseterre, St. Kitts, March 25, 2018 (SKNIS): Following through on a pledge to assist the Mol-Phil Explorer Group, Ross University School of Veterinary Medicine (RUSVM) handed over a cheque for over $16,000 on Thursday (March 22) to support the group’s programmes and activities. RUSVM has committed to assisting the group in several ways.

The cheque was handed over by Dr. Sean Callanan, RUSVM, Dean on behalf of Adtalem – parent company to the school. He emphasised the importance of education to the school and added that because of the approach used by the group, the institution was happy to fund a project that is empowering young people. He told the members of the group who were present that they were role models.

“By giving them an education [and] allowing them to develop a positive attitude, I think, you know, it’s much broader than just the books; it’s about how to socialise with one another, how to be responsible people and already, believe it or not, you’re role models – probably for kids that are much younger than you in the community – so I think this is a great initiative,” said Dr. Callanan.

The RUSVM Dean commended the Permanent Secretary in the Ministry of National Security, Osmond Petty, as well as the Coordinator of the Explorer Movement and Founder of the Mol-Phil Explorers Group, Inspector Rosemary Isles-Joseph, and her team for their dedication.

Mr. Petty explained that developmental programmes have been organised for the members of the group.

“At the moment they’re engaged in drumming, because we want to have our own drum corps. They’re also engaged in activities to generally enhance the group [such as] after school programmes, and so on, and we intend to roll out these in a big way as funds will allow,” Mr. Petty said. “They meet at Phillip’s Village on the basketball court and there is an open field close by which we intend to make their camp site. I’m pleased that Ross University has even offered to provide some assistance with that development when we [get to] the point of constructing a camp building and so I am pleased to be here.”

Inspector Isles-Joseph also thanked the dean and the school for their generous contribution to the group.

“I love children and I am thankful for the opportunity to help to build the strength and the morals of these children and I hope that this will go on for years, and as long as the Lord above permits me, I will give it my all,” said the Inspector.

RUSVM is a member of the Coalition of Support for St. Kitts-Nevis Security Initiatives that comprises several private sector entities. The Coalition has been a long time benefactor for and partner of the Ministry of National Security in the fight against crime.