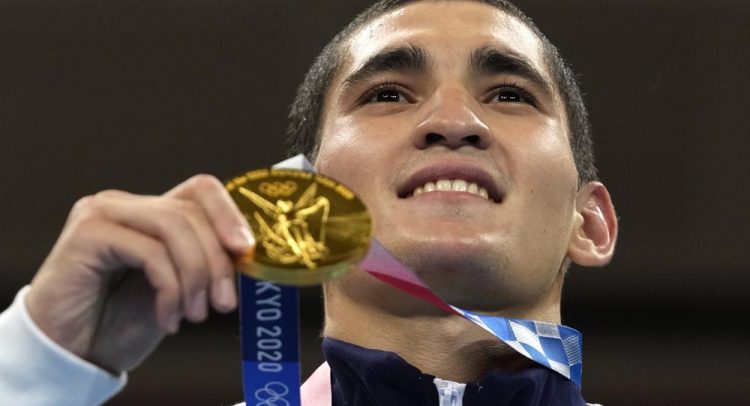 TOKYO (AP) — A roundup of gold medals from Thursday, August 5, at the Tokyo Games:

Batyrgaziev won the bout 3:2, cruising to victory after winning the first two rounds on three of the five judges’ cards.

Lázaro Álvarez of Cuba and Samuel Takyi of Ghana won bronze medals. Takyi’s medal is the fifth won by Ghana in all sports in its Olympic history, and its first since 1992.

Hungary’s Sandor Totka won the gold medal in the men’s kayak 200-meter, becoming the first non-British paddler to win the event since it started in 2012.

Totka beat Heath for the European championship earlier this year and bolted off the start line before claiming victory in a photo finish that saw 0.045 seconds separate gold from silver.

The United State’s Nevin Harrison won the women’s canoe sprint 200 in the event’s Olympic debut, overtaking Canada’s Laurence Vincent Lapointe at the halfway mark and powering across the finish line.

The Olympics were the first time Harrison and Vincent Lapointe faced each other on the water. Harrison won the world championship in 2019 when she was just 17 and Vincent Lapointe was serving a provisional drug suspension that was later overturned on appeal. The Canadian had won the previous six world titles.

Harrison is the first American woman to win gold in a canoe sprint race, and the first to medal since 1964.

Carrington won her third gold medal in three days, to go with her victories in the kayak single 200 and double 500. She is still scheduled to race the 500 fours.

Australia’s Thomas Green and Jean van der Westhuyzen won the men’s kayak double 1,000 at the Sea Forest Waterway with a finishing kick over the final 200.

Germany’s Mox Hoff and Jacob Schopf were 0.304 seconds behind to to take silver. Rodek Slouf and Josef Dostal of the Czech Republic won bronze.

The 14-year-old Quan took gold with 466.20 points and the 15-year-old Chen grabbed silver with 425.40 as China completed a golden sweep of the women’s diving events.

Melissa Wu of Australia claimed the bronze medal with 371.40 points.

Belgium defeated Australia in a shootout to win gold in men’s field hockey.

The score was tied 1-all at the end of regulation before Belgium won the shootout 3-2. Alexander Hendrickx scored the penalty stroke that put Belgium ahead in the shootout and Vincent Vanasch got the clinching save.

Belgium was the 2016 Olympic runner-up.

India won bronze earlier in the day with a 5-4 victory over Germany. It was India’s first field hockey medal since 1980.

The 39-year-old Sánchez scored a 28.06 in the final bout, her screams echoing off the walls at the Budokan as she put in a spirited demonstration of karate form. Shimizu’s score was 27.88.

The 24-year-old Da Costa is the 2018 world champion and a two-time European champion in his weight class, but he won a disappointing bronze at the European competition last May.

He overcame an early loss Thursday in Tokyo to Jordan’s Abdl Rahman Almasatfa and got a boost from the injury retirement of Italy’s Angelo Crescenzo, the 2018 world champion at 60 kilograms. Da Costa beat Kazakhstan’s Darkhan Assadilov to reach the final.

The 21-year-old Goranova won the final bout 5-1, scoring two yukos in the opening minute and adding a waza-ari with 1:16 left. The 2019 European champion qualified in June for the inaugural Olympic competition in karate at the Budokan.

Germany’s Florian Wellbrock added a gold medal in marathon swimming to his bronze medal at the pool, winning the men’s 10-kilometer race at Tokyo Bay.

Wellbrock pulled away on the final lap to win by a dominating 25.3 seconds, finishing in 1 hour, 48 minutes, 33.7 seconds. He also won a bronze in the 1,500-meter freestyle on the last day of swimming at the pool.

The silver went to Hungary’s Kristof Rasovsky in 1:48.59.0, while Italy’s Gregorio Paltrinieri picked up the bronze in 1:49.01.1. The Italian was silver medalist in the 800 freestyle at the pool.

He won in men’s park, breaking what had been Japanese domination in all three previous events.

The silver went to Pedro Barros of Brazil. Cory Juneau took bronze, the second skateboarding medal for the United States.

Palmer’s gold was the first medal in skateboarding for Australia. All the golds in the other three events went to Japanese skaters.

Megan Rapinoe and Carli Lloyd each scored a pair of goals and the United States won the bronze medal in women’s soccer with a 4-3 victory over Australia.

It was arguably the best the Americans had looked during the course of a rocky tournament that opened with an uncharacteristic 3-0 loss to Sweden. Rapinoe set the tone early with a goal scored directly from a corner kick.

The loss spoiled the Australians’ first-ever trip to the medal round at the Olympics. No Australian soccer team, men or women, has ever won a medal.

Spanish teenager Alberto Gines Lopez won the first Olympic gold medal in sport climbing, riding a win in the speed discipline to the top of the podium.

The 18-year-old opened the finals with the speed win, then showed off his all-around skills by finishing seventh in lead and fourth in bouldering. He finished with 30 points — the finishes are multiplied together — to edge American Nathaniel Coleman by two.

Coleman topped three of the four “problems” to win bouldering, was fifth in lead and sixth in speed.

Austrian Jakob Schubert had the climb of the night, becoming the first man or woman to reach the top of the 45-meter high lead wall in three days of competition. His climb moved him into the bronze medal spot and knocked Czech climber Adam Ondra off the podium.

China’s women continued their table tennis dominance, winning a fourth straight gold medal in the team event with a 3-0 win over Japan.

Wang closed out the sweep by beating mixed doubles silver medalist Shiwen Liu 3-0. China has taken ever gold in the women’s team event since it started at the 2008 Beijing Games. It didn’t drop a single match in this year’s tournament.

Steven Gardiner of the Bahamas won the men’s Olympic 400-meters gold medal, pulling away from the field at the halfway point and finishing in 43.85 seconds.

Gardiner adds the Olympic gold to the world title he won in Qatar two years ago.

Jose Anthony Zambrano of Colombia took silver, also the same as he did at worlds. The bronze medal went to Grenada’s Kirani James, who now has gold, silver and bronze from the last three Olympics.

Hansle Parchment of Jamaica won gold in the 110-meter hurdles.

American Grant Holloway, the world champion, was in front through nine out of the 10 hurdles, but suddenly faded on the last. Parchment flew past him to add an Olympic gold to the bronze medal he won at the 2012 London Games.

Parchment won in his season’s best time of 13.04 seconds.

Holloway took silver in 13.09 and another Jamaican, Ronald Levy, had the bronze in 13.10 seconds.

Damian Warner of Canada won the decathlon after two grueling days of competition in the Tokyo heat and humidity.

Warner, who wore an ice vest often during the competition to battle those conditions, posted an Olympic record of 9,018 points for the gold. He improved on his bronze five years ago in Rio de Janeiro.

Nafissatou Thiam successfully defended her Olympic title in the heptathlon as a seventh-place finish in her heat in the last event, the 800 meters, was enough for her to take the gold with 6,791 points.

Thiam got revenge for losing out to Britain’s Katarina Johnson-Thompson at the world championships two years ago. Johnson-Thompson withdrew on the first day of the heptathlon in Tokyo with a calf injury.

Katie Nageotte won an unexpected gold for the United States in the pole vault ahead of world champion Anzhelika Sidorova of Russia.

Nageotte failed on her first two attempts of the competition at 4.50 meters but improved from there to clinch her first major medal.

Nageotte cleared 4.90 at her third attempt in the medal-clinching round. Sidorova passed on her last chance at 4.90 and moved the bar to 4.95 but didn’t come close to clearing that.

Italy’s Massimo Stano won the men’s 20-kilometer race walk at the Olympics, and Japan secured the silver and bronze.

It was the first time since the 2008 Beijing Games that China wasn’t on the podium.

Stano took the gold medal in 1 hour, 21 minutes and 5 seconds in Sapporo on the northern Japanese island of Hokkaido.

Ryan Crouser broke his own Olympic record on his way to shot put gold.

On his last attempt, Crouser went 23.30 meters to earn the first track and field gold for the American men at the Tokyo Games. U.S. teammate Joe Kovacs finished second and Tomas Walsh of New Zealand was third.

Crouser was already the world-record holder after breaking a 31-year-old mark on June 18 at the U.S. Olympic trials. His throw that evening went 23.37 meters.

In the heat at Olympic Stadium, Crouser took the lead on his first attempt and saved his best for his final one.

The Cuban-born Pichardo recorded 17.98 meters on his third attempt to clinch his first Olympic title. He previously won silver medals at the 2013 and 2015 world championships while representing Cuba.

Burkina Faso’s Hugues Fabrice Zango claimed the bronze with 17.47, the first Olympic medal ever for his West African country.

Shanne Braspennincx of the the Netherlands has won gold in the women’s keirin, hours after teammate Laurine van Riessen was taken out of the Izu Velodrome on a stretcher following a crash.

Braspennincx went to the front on the final lap of the six-lap race, where the first three are paced by a motorized bike and the last three are a free-for-all sprint to the finish.

She was followed across the line by New Zealand’s Ellesse Andrews with the silver medal and Lauriane Genest of Canada taking bronze.

Braspennincx’s victory keeps the gold medal in Dutch hands. Elis Ligtlee won it at the Rio Games before retiring.

Britain’s Matthew Walls won the opening scratch race of the four-event omnium and was never really challenged over the remainder of the races in winning the gold medal.

Walls finished third in the tempo race and second in the elimination race before taking a lap on the field early in the concluding points race to effectively put the gold medal out of reach.

Campbell Stewart of New Zealand gained his second lap on the field just before the race concluded, sending him soaring from out of the medals to silver. Defending champion Elia Viviani of Italy fell to bronze.

Kawai won the 63kg category at the 2016 Games. Her younger sister, Yukako, won the 62kg class on Wednesday.

Kumar was trying to become India’s first Olympic gold medalist in the sport.

American Thomas Gilman, who lost his opener to Uguev 5-4 on a move in the final 10 seconds of the match, earned bronze. He defeated Iran’s Reza Atrinagharchi 9-1.

Nurislam Sanayev of Kazakhstan was the other bronze medalist. He defeated Bulgaria’s Georgi Vangelov 5-1.

San Marino’s Myles Amine defeated India’s Deepak Punia 4-2 for bronze. It was the first-ever Olympic wrestling medal for the country with about 34,000 people.

Albert Batyrgaziev, of the Russian Olympic Committee, holds his gold medal after defeating Duke Ragan, of the United States, in their final round feather weight 52-57kg boxing match at the 2020 Summer Olympics, Thursday, Aug. 5, 2021, in Tokyo, Japan. (AP Photo/Themba Hadebe)

Moderna COVID-19 vaccine tallies more than $4B in Q2 sales