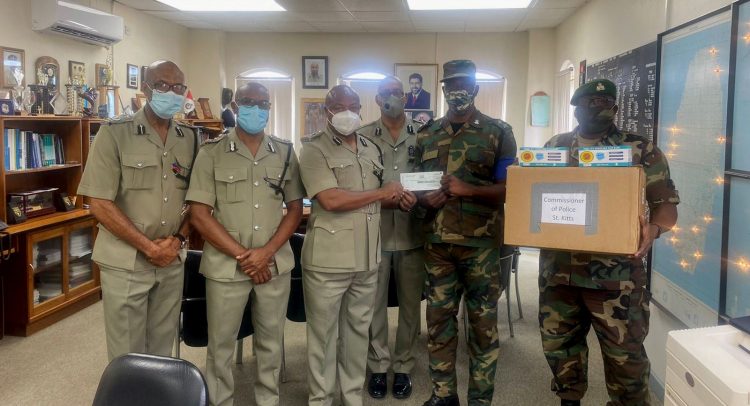 Basseterre, St. Kitts, June 03, 2021 (RSCNPF): Commissioner of Police Colin John of The Royal St. Vincent and the Grenadines Police Force has expressed his appreciation for a donation he received from The Royal St. Christopher and Nevis Police Force (RSCNPF) and the Police Cooperative Credit Union (PCCU).

Inspector James Stephen, Head of the St. Kitts and Nevis contingent that travelled to St. Vincent and the Grenadines as part of the Regional Security System’s Peacekeeping Mission, presented Commissioner John with a cheque for $25,000 and a box containing 600 face masks. The kind gesture was made possible through a contribution of $10,000 from the PCCU and $15,000 which was collected from Police Officers, as well as the procurement of masks by the High Command.

On May 29, as the team prepared to leave the Federation, RSCNPF Commissioner of Police Hilroy Brandy asked Inspector Stephens to convey his warmest regards to the Commissioner and to express his concern for the safety and wellbeing of the members of the Police Force there.

“I want you to hand over this manager’s cheque of $25,000 from the Police Force and the Police Credit Union to Commissioner John to show that in times of disaster we [wanted to] contribute to the men and women of the Royal St. Vincent and the Grenadines Police Force,” said Commissioner Brandy.

Upon receiving the donation and the message from the Commissioner on Wednesday, June 02, 2021, Commissioner John thanked Commissioner Brandy, the Officers of the RSCNPF and the PCCU on behalf of the members of the organisation.

There has been large-scale devastation in the northern section of the main island of St. Vincent following the eruption of the La Soufrière Volcano and thousands had to be evacuated as a result.